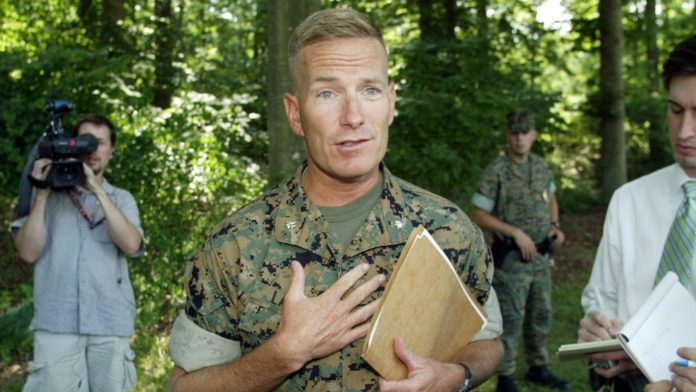 A retired Marine general who also served as spokesperson for the Department of Homeland Security in the Trump administration says he’s sick and tired of hearing President Donald Trump brag about the “great job” he’s doing for the U.S. military.

….There is a lot of explaining to do to the millions of people who had just elected a president who they really like and who has done a great job for them with the Military, Vets, Economy and so much more. This was the illegal and treasonous “insurance policy” in full action!

Lapan responded by accusing Trump of stealing money from the troops in order to build his border wall:

It’s time to retire the line about the military after your shutdown forced Coast Guardsmen and women to work w/o pay for 35 days & now you’re taking billions of $ away from the military for a border wall (that Congress is already funding).

The general has been critical of Trump in the past, too. In November of last year, Lapan accused the president of using military service members as “political pawns” when the president deployed them to the U.S.-Mexico border in response to a caravan of Central American immigrants Trump claimed were trying to “invade” the United States.

You got 46% of the vote in a year when voter turnout was low. That includes the cheating. Stop kidding yourself. The majority hates you.

Name just one thing you’ve done for our veterans? Besides not paying our Coast Guard during the holidays in a hissy fit? Name one! No veteran is better off today because of anything you’ve done. Was it lying to them about pay raises they didn’t get? #AnyAdult2020

How can you say you did a “great job with the Vets” when the entire Department of Veterans Affairs was being run by 3 random millionaire Mar-a-Lago members, barking orders at senior VA leaders? Who do you think you’re fooling? pic.twitter.com/jBd7fmxcAI

Perhaps later today Trump can tell us about all the respect he has for the past presidents, including the one he accused of not being born on the United States.