The United States Blues
Home National News Rex Tillerson Disses Trump As An ‘Undisciplined’ Man Who ‘Doesn’t Like To... 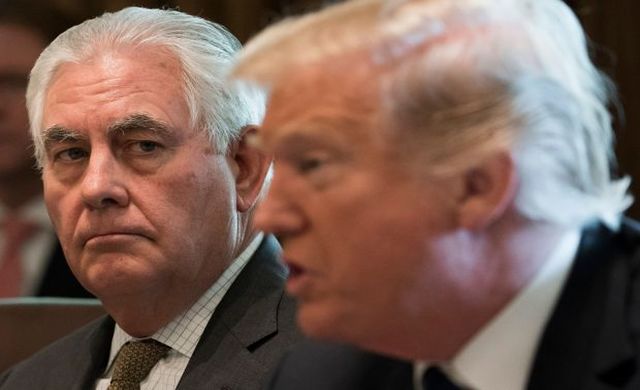 Though he only lasted as secretary of state for 13 months in the Trump administration, Rex Tillerson saw enough of President Donald Trump to realize that he was dealing with a person who thinks and acts on the level of a child.

For the first time since he left the State Department, Tillerson is speaking out about his time in government, and he isn’t painting a very flattering picture of the current head of state, telling Bob Schieffer of CBS News that he never met Trump before he was offered the job of secretary of state and noting that it was “challenging” to work with the president due to the fact that Trump is “a man who’s undisciplined, doesn’t like to read, doesn’t read briefing reports, doesn’t like to get into the details of a lot of things but rather says ‘this is what I believe.'”

As an example of the challenges he faced with Trump, Tillerson said he often had to remind the president there was a legal protocol to follow, which deeply frustrated Trump:

Tillerson also told Schieffer that he thinks many Americans simply don’t take the time to study the issues that directly impact them, and that leads them to believe whatever the president posts on Twitter:

“I will be honest with you, it troubles me that the American people seem to want to know so little about issues, that they are satisfied with a 128 characters…I don’t want that to come across as a criticism of him. It’s really a concern that I have about us as Americans and us as a society and us as citizens.”

In many ways, Donald Trump is the perfect president for our times. He speaks in soundbites, posts BS on social media, and has the intellectual curiosity of a tree stump. But that also makes him a threat to this country and the world.

WATCH: Former Secretary of State Rex Tillerson is speaking publicly about what led to his firing in March by President Trump.