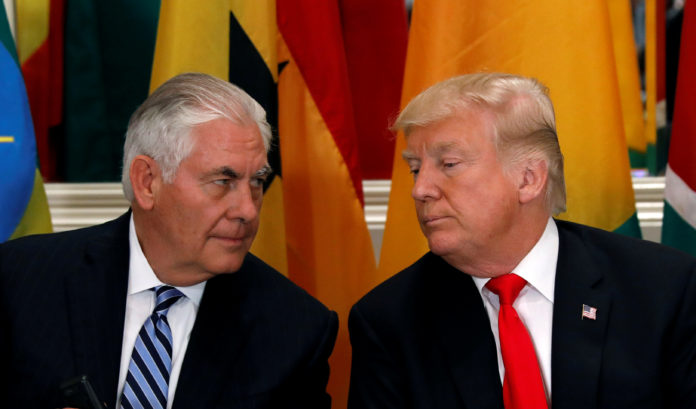 It’s been awhile since we heard from former Secretary of State Rex Tillerson, a man who allegedly called President Donald Trump a “moron” for his complete lack of comprehension when it came to foreign policy, but now he’s back, and it appears he may be taking his revenge on the president.

Tillerson spoke with the leaders of the House Foreign Affairs committee on Tuesday in a lengthy session that, an aide said, touched on his time working in the Trump administration, the frictions he had with the president’s son-in-law, and efforts to tackle issues like Russian interference in the 2016 election.

Also, it was Tillerson who reached out to the committee, not the other way around:

In a more than six-hour meeting, he told members and staffers that the Trump administration actively avoided confronting Russia about allegations of interference in the election in an effort to develop a solid relationship with the Kremlin, a committee aide told The Daily Beast.

Another topic of discussion was top White House adviser Jared Kushner, who has been a portfolio from the president that includes matters of foreign policy such as brokering a Middle East peace deal.  But apparently Kushner did more harm than good when it came to international relations:

Tillerson told the committee that the president’s son-in-law, Jared Kushner, at times impeded his ability to communicate effectively and introduce to President Trump policy proposals developed by State Department experts on major foreign affairs matters across the globe, not just in the Middle East. Kushner, a White House adviser, has publicly focused much of his international efforts on the Middle East and is set to unveil a Middle East peace plan in the coming weeks.

All of this, The Daily Beast notes, comes just a month after Special Counsel Robert Mueller published his report on the Russian attack on the 2016 election:

Since then, top Democrats on the Hill have demanded that Attorney General Bill Barr and Mueller answer questions related to the report and its publication. Barr has declined to testify before the House, citing the insistence of the committee that staff lawyers be allowed to conduct some of the questioning. Mueller is reportedly in negotiations to testify, though the Department of Justice had previously not agreed on a date for him to do so.

It’s been said that Donald Trump demands absolute loyalty from staffers who work for him. And yet he offers no such loyalty in return, eagerly tossing anyone under the bus that dares to contradict or disagree with him. Based on the fact that Tillerson willingly spoke to the foreign affairs committee and even suggested the meeting, it appears the president’s shabby treatment of colleagues may be coming back to bite him in a way that could well cost him his presidency.