The United States Blues
Home News Tillerson Out As Secretary Of State After Trump Announces His Departure Via... 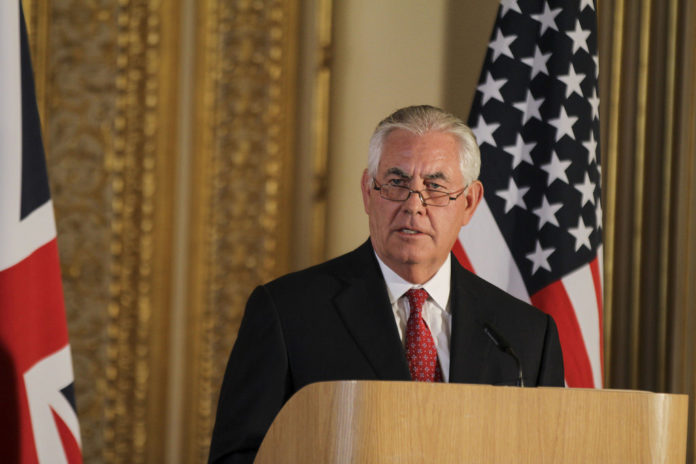 After a rocky tenure in the position, Rex Tillerson is out as Secretary of State. The former ExxonMobil CEO-turned-diplomat’s relationship with the president had struck a tenuous tone from day one, most notably when major newspapers picked up that Tillerson had allegedly referred to Trump as a “moron.”

According to a report by Vox, at just over a year, Tillerson had one of the shortest tenures in modern history.

Though Tillerson has been fired, looking into the effect of his tenure takes a bit more work. According to Elizabeth Saunders from George Washington University, he will leave office without any major achievements. And that’s the problem:

“Under Tillerson’s watch, 60 percent of State’s top-ranking career diplomats resigned and new applications to join the foreign service fell by half, according to a November count by the American Foreign Service Association. This hollowing out of the foreign service, combined with Tillerson’s inability to appoint people to vital positions like Ambassador to South Korea, delayed American responses to major crises and weakened the State Department for a ‘generation.’”

Many noted the failings of the U.S. State Department under his leadership, and charged him with advancing the president’s isolationist and protectionist agenda by gutting the State Department, not giving them the resources they needed. The main problem with that is if you don’t bother to fund diplomacy, the only remaining option is war.

Mike Pompeo has called for the Iran nuclear agreement to be ripped up, played down talk of Russia's interference in the election and suggested that regime change in North Korea would be a welcome development (from November) https://t.co/CG6soWJhsD

Suggestions like ripping up the Iran nuclear deal or even the president’s idea of just being “tougher” in general because other countries are taking advantage of America demonstrate the level to which these men are not interested in diplomacy, but dominance.

The president often says, “America first.” Time will tell how Director Pompeo fares in a position that Tillerson was unable to master.