The United States Blues
Home News Rick Santorum admits Trump is not a man of his word, so... 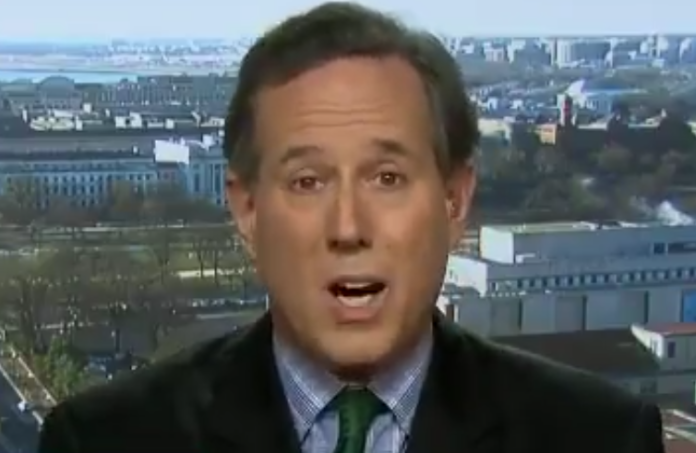 Rick Santorum conceded on Tuesday that President Donald Trump is not trustworthy because he has gone back on his word on countless occasions when he has been brought a compromise deal that he had said he would sign.

As we all know, Trump has backed out of a lot of deals after telling his own party that he would sign them, resulting in a lot of awkward situations for Republicans.

For instance, there was the $25 billion offer Democrats made for his wall in exchange for protecting DACA recipients and refugees covered by temporary protected status permanently, a deal Trump had agreed to sign before rejecting it when it was brought to him by members of both parties last summer.

Most recently, Trump told Republicans that he would sign a continuing resolution to fund the government through early February. But after Senate Republicans overwhelmingly passed it, Trump refused to sign it, which is why we are 32 days into a government shutdown.

Clearly, Trump cannot be trusted when he claims he will sign something, even if it’s a deal he agreed with.

CNN host Alisyn Camerota reminded Rick Santorum of the first deal on Tuesday morning after the former Pennsylvania senator and Republican presidential candidate tried to blame “both sides” for the shutdown.

Santourm responded by conceding that Trump is not a man of his word, but not without trying to claim that all presidents have done it:

“I think we have seen that out of chief executives now for quite some time that people get in the room, they make deals and then they walk away,” he said. “I’m not saying the president doesn’t have blame here. I think the president has not always stood by his word whether it’s public or private negotiations. That’s one of the reasons I’m actually proud he’s put forward a concrete proposal here. Hopefully he continues to do so.”

“It happens in every government shutdown. Both sides shut it down,” @RickSantorum says.

Santorum: “This isn’t about policy. This is about numbers.”

Again, Trump made an offer he calls a “compromise,” but he would get a permanent wall on the border while Democrats would only secure a temporary three-year reprieve for DACA and TPS that Trump would likely kill if he is re-elected in 2020. In short, Democrats would get nothing while he gets exactly what he wants and would just go back to shutting the government down every time he doesn’t get his way. That’s not a compromise at all.

And Democrats can’t even trust that Trump will sign it even if they do accept his offer. After all, he could reject it and then argue that if Democrats are willing to give him $5.7 billion they should be willing to fund his entire wall proposal and demand billions of dollars more. This could easily be Trump luring Democrats into a trap and then killing the deal at the last moment to humiliate them. There’s simply no way to trust that Trump will keep his word. He has repeatedly demonstrated that he is incapable of keeping his word, and Democrats should not trust that this time will be any different.