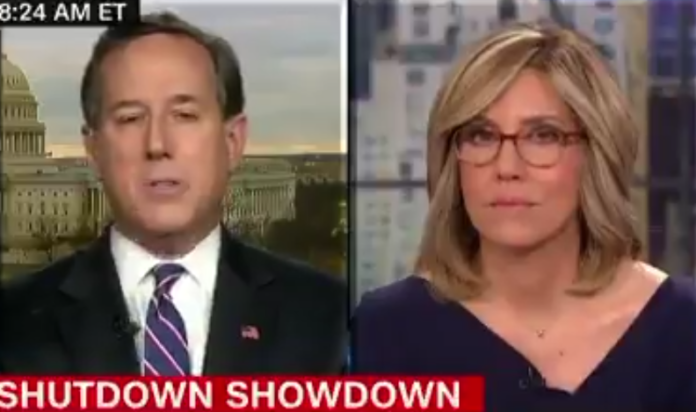 Rick Santorum, one of President Donald Trump’s biggest defenders on CNN, is now admitting that a wall won’t stop drugs from entering the country.

On Tuesday night — and on several occasions prior — one of Trump’s biggest talking points has been that we need a wall along the Southern border because it will somehow put an end to illegal drugs being smuggled across it.

Of course, Trump’s claim has been repeatedly debunked, with Factcheck.org writing that Trump’s wall would not stop drugs because most drugs are smuggled through legal ports of entry”

Mexican cartels “transport the bulk of their drugs over the Southwest Border through ports of entry (POEs) using passenger vehicles or tractor trailers,” the Drug Enforcement Administration said in a 2015 report. “The drugs are typically secreted in hidden compartments when transported in passenger vehicles or comingled with legitimate goods when transported in tractor trailers.”

In short, what we really need at the border is more security personnel, drug-sniffing dogs and technology to detect and stop drugs once they reach a port of entry, exactly what Democrats have been proposing all along.

On Wednesday morning, Santorum went on a tirade during an appearance on CNN with Alisyn Camerota and former Clinton speechwriter Joe Lockhart.

“That’s really unfair to the families affected who say, ‘look, these people are here unjustifiably, they’re here illegally,’ not like other immigrants who are here legally,” Santorum whined even though border crossings are at a 20-year low and illegal immigrants commit crime at a lower rate than natural born American citizens.

“How does a wall stop the heroin trade?” Camerota interrupted to ask.

He could have repeated Trump’s lies or evaded the question entirely. Instead, Santorum conceded that Trump’s wall won’t do much to stop drugs.

“Well, look, the wall is part,” Santorum awkwardly began. “Does it help on the margins? Maybe a little bit, you’re right, most of the heroin comes through ports of entry.”

Camerota then continued to educate Santorum.

“The research suggests it comes through ports of entry through tractor-trailers and passenger vehicles,” she said. “People who are climbing over a fence aren’t lugging heroin.”

“I don’t think the American public needs a lecture from you or from the President on what the problem is. There is not a crisis at the border,” @joelockhart says to @RickSantorum that the “real national emergency” is gun violence. https://t.co/xPyaoSwi8s pic.twitter.com/hwRGu1BQj7

Santorum, like many other Republicans, failed to defend Trump and his talking points. Clearly, fact-checkers have made it more difficult for Trump and his allies to keep repeating debunked claims that have been proven to be false.

This is a major admission by Santorum that undermines Trump’s desperate effort to get money for his wall, reveals Trump as a liar and gives Democrats even more reason to deny him the funding he is demanding.