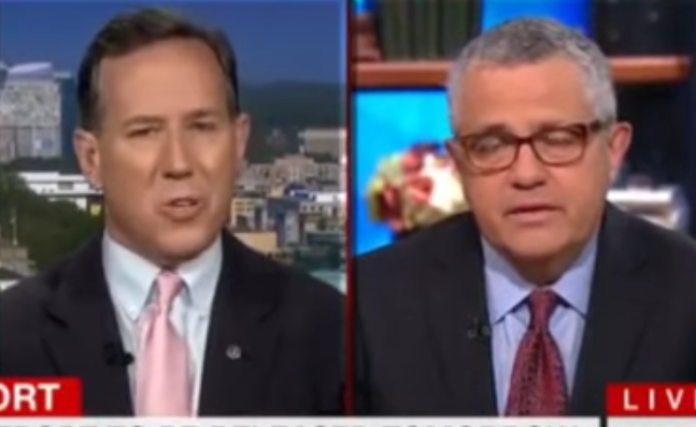 Barr’s four-page summary of the 400-page document made it pretty clear that he’s protecting President Donald Trump, especially since members of Mueller’s team have revealed that the report is more damaging to him than Barr portrayed it.

After all, if the report truly exonerates Trump, why is Senate Majority Leader Mitch McConnell (R-Ky.) so desperate to block it from being released in full? By redacting the document, Barr is only making things worse as a majority of Americans demand the full report so that everyone can see if it really does exonerate Trump.

But Santorum appeared on CNN’s New Day to whine about the release.

“We’ve been hearing this for two years, what we don’t know and that this is speculation that all these horrible things that are out there that we’re not going to know,” he incoherently began. “Because what you’re going to find tomorrow, as I believe, is going to be a nothing, a nothingburger.”

Of course, the reason why it would be a “nothingburger” is that Barr redacted all of the crucial parts that implicate Trump in collusion and obstruction of justice.

“As much speculation as we’ve had, as much as all these horrible crimes and impeachment and all these things that were going to happen and spending huge amounts of media time covering this, we have nothing,” Santorum continued. “The reality is we still are going to say, ‘well, you know, we’re not going to know tomorrow. To keep this story alive and to keep the pressure on the president we’re going to continue to say that there’s something we might not know, and that’s just — I just don’t think that’s good journalism.”

CNN host Poppy Harlow fired back by pointing out that Barr and Trump can end all the speculation and mistrust by releasing the full report instead of a redacted version.

“Let me just make a point of fact here,” Harlow said. “We would know all if Barr would turn over to Congress and the American public the full — ”

Santorum rudely cut her off by protesting, but she persisted.

“You very well know that he could join Nadler and go to court and ask for a 6E exemption to be able to show that grand jury material,” she continued.

“The important thing here is even what we know now is not a nothingburger,” he noted. “The president fired the head of the FBI because he wanted to stop the Russia investigation. The president fired his attorney general because he recused himself. The president has talked about pardons. This is not a nothingburger. You can have all the talking points you want that say that this is all fine. You can call it whatever you want, but this isn’t over and the White House is playing into the Democrats’ hands by trying to keep all this information from people.”

Only a full Mueller report will settle this investigation once and for all. All Trump and Barr are doing is engaging in a cover-up by redacting material they don’t want anyone to see. The extent of how damaging the Mueller report is to Trump is underscored by the fact that Rudy Giuliani is still crafting a rebuttal to the report, which he would not have to do if it totally exonerated his client.

The American people and Congress deserve to see the Mueller report no matter what it says. Anything less casts suspicion on Trump and his Justice Department and will only create deeper mistrust. Republicans, including Santorum, simply should not be fighting so hard to keep the report buried if it really does exonerate Trump as Barr claims.