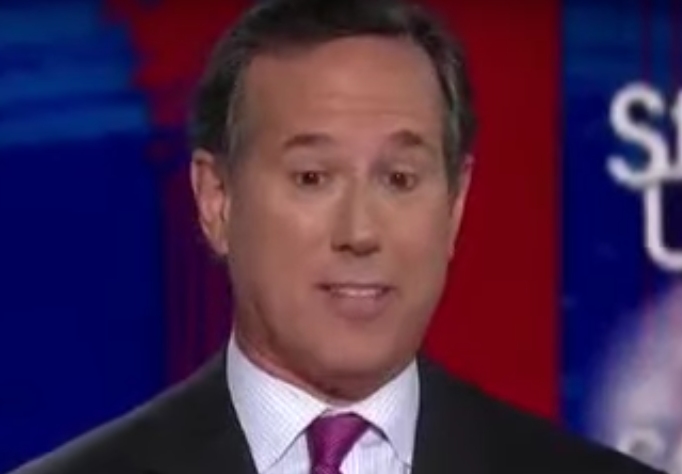 Republican political hack Rick Santorum attempted to defend President Donald Trump’s trade war against China on Sunday, only to get humiliated by conservative Bill Kristol, who slammed Santorum for opposing the Trans-Pacific Partnership trade deal that would have reined China in without hurting our own economy.

Trump’s obsession with tariffs has put our country on the brink of a recession as the stock market continues to plunge after the recent tantrum he threw against China on Twitter in which he ordered American companies to stop doing business there.

As recession looms, Trump is apparently starting to realize that his policies are not doing him or the nation any good. But he is stubbornly refusing to reverse course even as his own political future sinks with the economy.

Of course, Santorum sees things differently, or at least pretended to.

“I don’t see that at all,” Santorum replied. “He hates being there. You give him too much credit for these things. Look, he just hates being at these meetings. He doesn’t like the dynamics that are going on there.”

Santorum then proceeded to claim that Trump is fighting a good fight regardless of whether it’s failing or not.

“What you’re seeing is a president engaged in a battle that presidents for generations have said they will fight and none of them have,” he said. “He’s taking on China and he’s doing it in a way — some people can quibble and saying he’s doing it the right way or wrong way — but he’s doing it!”

“That’s total nonsense!” Kristol claimed before pointing out that the Trans-Pacific Partnership negotiated during the Obama administration would have done more to rein in China without hurting our own economy, but conservatives like Santorum and Trump attacked it because it was an Obama achievement.

“The TPP would have done more damage to China than anything Trump has done!” Kristol said. “Because people like you demagogued it. A lot of the attacks on the TPP were pure demagoguery.”

Experts have pointed out before that the TPP would have forced China to start changing their ways.

University of California China International Affairs chair Barry Naughton told Foreign Policy that China has repeatedly denounced the deal as one that contains them because it “increases the pressures within China for more decisive economic reforms.”

But without United States involvement in the deal, China could enter it and control the economic policies on their terms, which would be more beneficial to them instead of us.

Trump is trying to pressure China through tariffs, but he’s hurting our own economy in the process while TPP would not have done so. In fact, it would have pulled many Asian economies closer to us, opening up more opportunities and creating more jobs.

Make no mistake, we are heading for a recession because of Trump’s foolish 19th-century trade policies, and Americans had better wake up and realize that they have to oust Trump from office if they want the bleeding to stop.