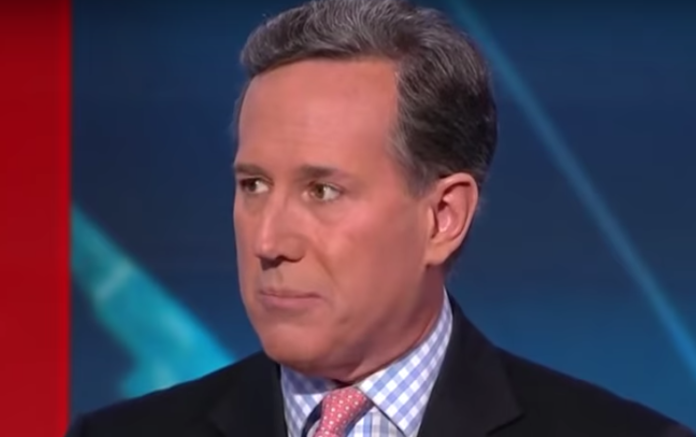 CNN political analyst Rick Santorum demonstrated on Wednesday night that his usefulness as an analyst has reached beyond its expiration date when he desperately defended President Donald Trump in a batsh*t crazy attack on the Michael Cohen hearing.

Cohen testified in front of the House Oversight Committee all day and his credibility only rose as he answered every single question and provided damning information implicating Trump in many more crimes, including tax evasion and insurance fraud.

Cohen even provided more information for the Russia investigation by connecting more dots, which resulted in former Director of National Intelligence James Clapper concluding that Trump knew about Russian contacts all along.

All Trump and his defenders could do is call Cohen a liar and attack his credibility, ignoring the irony since Trump is a serial liar who has lied over 8,000 times since taking office.

Santorum whined about the hearing even taking place, insisting that Democrats should have postponed it until after Trump’s Vietnam summit with North Korean dictator Kim Jong Un.

“There used to be a day when a president was at a summit talking about nuclear arms, that we wouldn’t do anything to undermine the president here at home,” Santorum said. “And no one seems to care about this. The idea they couldn’t put Michael Cohen’s testimony off a few days until he gets back into the country is reprehensible. Period. Stop, full stop.”

However, Congress has repeatedly held hearings and heard testimony throughout our history while the president is overseas. It happened constantly during the Obama administration as Republicans continued their Benghazi investigation, and I don’t remember Santorum complaining then.

Furthermore, Trump could use foreign trips as an excuse to keep delaying testimony if Democrats were to agree to what Santorum demands. And the fact is that Cohen has been receiving threats and intimidation from Trump, which is why he had already postponed his testimony once.

Clearly, the best time to do this was when Trump was nowhere near Washington DC.

Santorum continued by ignoring all the crimes Cohen implicated Trump in, and focused on the campaign finance felonies by claiming that they aren’t really crimes at all, parroting a debunked line of attack that Trump and his supporters have repeatedly used to excuse Trump’s illegal activities, for which he is an unindicted co-conspirator known as “Individual 1” in court filings because he directed and coordinated the hush money payments to two women during the 2016 Election to cover up his extramarital affairs.

“Where does he tell the truth? On anything, really?” Santorum said. “He lies about Russia? In your mind, he doesn’t tell the truth about anything ever! So why is that inconsistent?”

If Cohen were not telling the truth, the committee would refer charges to the Department of Justice, a warning Cohen received from Rep. Elijah Cummings (D-Md.), the chair of the committee, when the hearing began. Also, Cohen received corroboration on many of his claims, including by Fordham University, which confirmed his claim that Trump threatened the school with a lawsuit if it ever released his records.

Clearly, Cohen’s testimony is credible and Trump supporters like Santorum are panicky and desperate because they know he’s credible. CNN should reevaluate Santorum’s employment because it’s clear that he isn’t doing his job as an analyst, and he’s not being paid by CNN to be a Trump stooge.