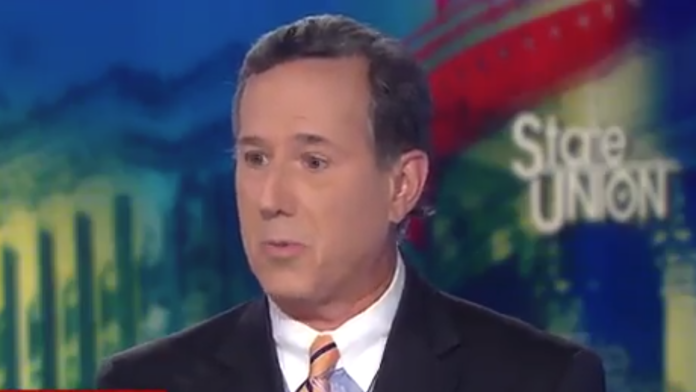 Former Pennsylvania Republican Senator Rick Santorum said Sunday on CNN that the victims of the mass shooting in El Paso might have lived if they’d only had their own guns to fight back.

“Public is for it until you have a discussion about what the consequences are. It happens because there is actually a debate about it.”

And that’s when the former senator began suggesting that every American needs to pack heat and start shooting the minute he or she sees something suspicious:

“And what you see from the shootings that take place, several of them this year, which is law-abiding people — not police — but other law-abiding people come and stop these things. Because they have the right to own guns. So taking that right away from law-abiding people doesn’t do anything to reduce the amount of crime and can make things worse.”

Then again, Rick, had the shooter not been able to acquire a semi-automatic weapon of mass death, there might not be 20 people lying in a Texas morgue right now. Or 9 others in Dayton, Ohio.

The problem, Santorum continued, is that the people in the El Paso Walmart were “soft targets” who failed to strap a gun to themselves before they headed out to buy school supplies for their children:

“They go to soft targets. That’s exactly right. The whole point is that when you restrict guns to law-abiding people, you make more soft targets.”

But guns AREN’T restricted to law-abiding people, Rick. They aren’t restricted to the mentally ill, either, though they damn well should be. As a matter of fact, pretty much anyone with the money and will to purchase a lethal weapon in this country can do so and not face a single question before they make their purchase.

The problem with idiots like Rick Santorum is that they’re in the pocket of the NRA and too brainwashed to have a single solution to what may well be the biggest problem facing this country.