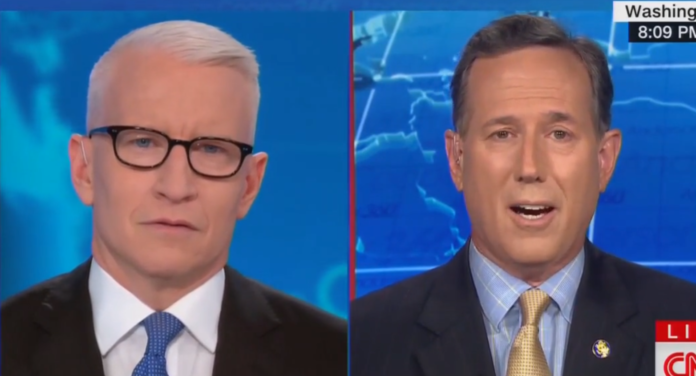 Santorum was asked by CNN host Anderson Cooper about Trump’s comments that he probably wouldn’t inform the FBI if another country came to him with information about his Democratic challenger. Santorum responded:

“Well, I mean, let’s be fair. I mean, the president said he would listen, but he would also send it to the FBI. He said he would do both. So, the question is whether he should do both, or just simply refuse to get the information. But he did say he would turn it over to the FBI, so…”

Panelist David Gergen quickly reminded Santorum that Trump had said “maybe” he would call the FBI in such a scenario.

And that’s when Santorum began with his “filler words” excuse:

The former senator from Pennsylvania then added:

“So, I took the president for his word that he would do both, which I think — I don’t think that’s necessarily inappropriate as long as he refers it to the FBI…As far as looking at the information, maybe he should, maybe he shouldn’t, but I don’t think there’s a crime in looking at the information as long as you refer it to the proper authorities.”

Later in the discussion, Santorum also tried to come to Trump’s aid by saying that at times the president uses imprecise language when he talks:

“The president wasn’t answering questions about solicitating information, he was saying, if someone came to you and said ‘Hey, I have some dirt’ –and he was talking more colloquially. Again, I think the president’s word, as often, are imprecise and not necessarily — you know, that’s why I think he didn’t want to be interviewed with Bob Mueller, is that he can sort of ramble and talk about things more loosely, and I think he was talking more of a general political context, that we get opposition research all the time.”

Filler words? Imprecise language? Let’s call it what it is: Treason. That’s the bottom line, no matter how Santorum or Trump’s cheerleaders at Fox News try to spin it.