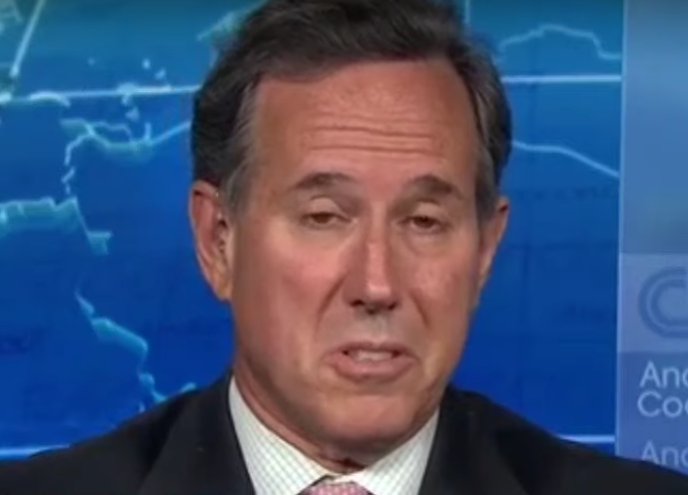 Even frequent Trump defender Rick Santorum is against the president’s effort to hold the next G7 summit at his struggling Doral golf resort in Miami.

Back in May, the Washington Post reported that the resort has lost 69 percent of its income over the last two years.

So, in what strongly appears to be an effort to promote the resort and generate new income, Trump shamelessly suggested that the next G7 summit be held there in 2020, drawing instant backlash from ethics watchdogs who have pointed out that Trump is violating the law and the Constitution by trying to use an official government function to enrich himself.

During an appearance on CNN, former Bush ethics lawyer Richard Painter made the same argument.

“Two district courts have cases brought against Donald Trump to pivot exactly this type of thing,” he said. “It would be a clear violation of the United States Constitution. Second, he’s using his presidency to promote his own business. That’s a conflict of interest entirely apart from the Emoluments Clause of the Constitution.”

“The fact is that the president should not be doing this,” he said. “It would be a violation of the law as far as I understand it. I hope this is the last time he mentions it. I hope if anybody who did suggests to him, I mean, it’s just remarkable that someone would suggest that it would be held at his — at Doral. Again, I hope that’s not true and if it is true, I hope they put an end to it very quickly.”

Guest host John Berman then tried to ask Santorum what he would say if he were Trump’s chief of staff and someone asked him about holding the G7 at Doral, and received a response so quick that Berman couldn’t even finish his statement.

“This is one of the things I scratch my head and wonder why the president doesn’t see the obvious, not just conflict of interest, but how it could be used by opponents to undermine some of the good things that he’s trying to accomplish there, and again, I’m disappointed that he even brought it up and I hope that it’s the last we hear of it,” he concluded.

Usually, one can find Santorum defending Trump no matter what. But apparently, even Santorum has a line that he won’t cross. Trump is abusing the presidency to promote his businesses as they bleed financially. It’s not a good look. It’s corrupt swampy look. And even Santorum knows it.