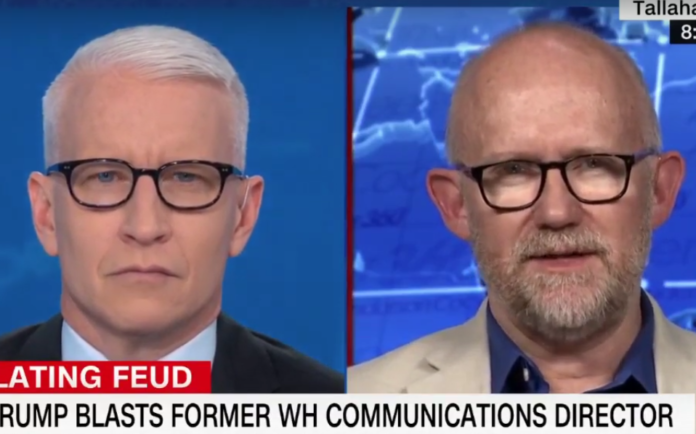 GOP strategist Rick Wilson informed Anthony Scaramucci on Tuesday night that he should have known that President Donald Trump would turn on him before taking aim at Trump himself for being a “manbaby” who would be useless in a fight.

Over the weekend, longtime Trump defender Scaramucci criticized Trump’s racism and hate that has incited white nationalist violence across the country. And Trump didn’t like the constructive criticism Scaramucci offered, immediately attacking him on Twitter in a temper tantrum that caused the former White House staffer to withdraw his support of Trump for re-election in 2020.

And now even the Trump campaign has thrown Scaramucci under the bus, demonstrating once again that Trump has no loyalty to anyone and doesn’t care about anyone other than himself.

Trump just uses people to get what he wants and then drops them.

During an appearance on CNN, Wilson said that Scaramucci should have seen this coming before he jumped on the Trump bandwagon because of Trump’s history of stabbing people in the back.

“I think Anthony gambled, went all-in on Trump,” Wilson began. “He spent the last year and a half trying to find a way back into a sense of having Trump’s ear and of course, once Trump shanked him, he was shanked. He was done. He was bleeding out on the floor never going to come back.”

“Is it putting your finger up in the wind? I don’t know,” Wilson continued. “But as Anthony found, the shocking revelation that Donald Trump is a faithless person in every dimension, the guy cheated or shanked every person in his life, wives, contractors, business partners, clients, the country and so the shocking revelation Trump is a bad dude, maybe Anthony isn’t that quick. There is no coming back after this guy puts you in the dirt and after you committed everything to him, you’re going to get screwed over.”

“You know, it’s ironic, Anderson, because I looked at Fox clips from when Anthony was named as communications director, and they thought he was the greatest thing since prepared mustard,” he said. “They thought it would be an amazing change. Well, now he’s an unperson.”

While Trump would probably win a Twitter war against Scaramucci, Cooper chimed in by opining that Trump would lose a fist fight against him.

“Donald Trump is a soft-handed manbaby,” he said. “He’s never taken a punch.”

Anthony Scaramucci “found the shocking revelation Donald Trump is a faithless person in every dimension,” says @TheRickWilson. Pres. Trump “has cheated or shanked every person in his life: wives, contractors, business partners, clients, the country…” pic.twitter.com/cp8G02LK12