The United States Blues
Home Uncategorized Rick Wilson: Maybe someday Stephen Miller ‘Will have a relationship with a... 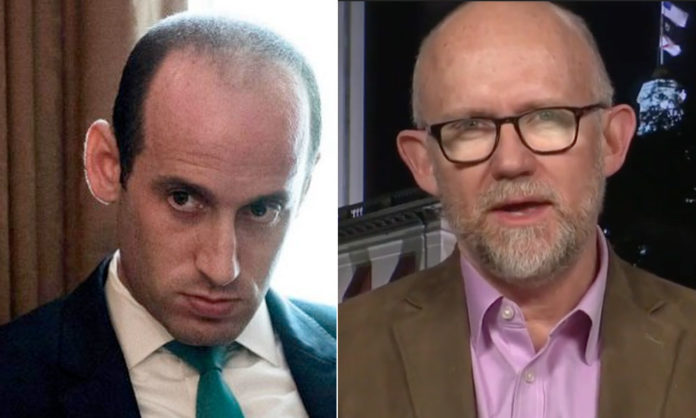 The ongoing government shutdown and President Donald Trump’s refusal to compromise over his demand for billions to build a border wall has now entered its 33rd day, but GOP strategist Rick Wilson said Tuesday evening that he sees the influence of another administration official on the White House’s inflexibility.

During an appearance on “All in With Chris Hayes” Tuesday evening, host Chris Hayes weighed in on Trump’s offer to extend temporary protection for DACA recipients in exchange for $5.7 billion to build his wall, commenting:

“Someone likened it to working out a deal with your roommate lower the rent and then taking it to the landlord,.That’s not the way it works, that’s not who you’re negotiating with.

“At some point, Stephen Miller’s hand appears in every immigration deal that this White House has had.

“There’s something deeply wrong with Stephen Miller — I think we can all acknowledge that.

“And maybe someday he’ll have a relationship with a live human woman.”

Clearly caught off guard by the remark, Hayes could only respond:

“I don’t know if that has anything to do with it.”

But Wilson was far from finished, adding that Miller is ruining Trump’s reputation of being a great deal-maker:

“The guy’s just a dark and weird figure and he wrecks Trump’s idea that Trump is this master negotiator. We have The ‘Shart of the Deal’ every day, where this thing goes crazy and off the rails every time Trump speaks about it, it gets less likely he’s going to get what he wants.”

Exactly! Trump had a deal that would have guaranteed him money for the wall in exchange for protections for Dreamers last year, but he walked away from it when he got criticism from right-wing media. Now he’s letting Ann Coulter and Rush Limbaugh lead him around by the nose yet again, proving that he has no true convictions or spine of his own.

As for Miller, it’s hard to know what his problem is, but it’s certainly safe to say he has one.