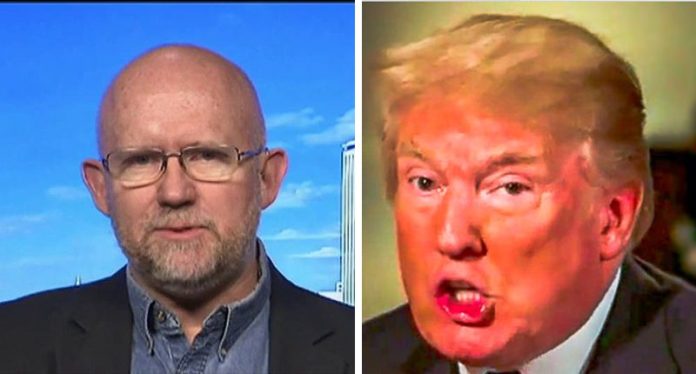 Former GOP strategist Rick Wilson is delighting in watching as President Donald Trump and the White House spiral out of control with each new revelation in the growing Ukraine scandal.

In a column he wrote for The Daily Beast, Wilson notes that Trump’s “bank-shot plan” to slag Joe Biden in an attempt to help secure victory in 2020 is clearly backfiring in every way possible:

“Donald Trump is having the latest in a long run of terrible, horrible, no good, very bad weeks, and the strain is showing on his poxed, jowly face and in his raging, undifferentiated anger at everyone but himself and everything but his own increasingly evident instability, incompetence, and desperation. Trump’s simultaneously baroque and idiotic bank-shot plan to disqualify Joe Biden in the 2020 election is backfiring, his Senate shield wall is cracking, and his crew in the House is reduced to staging dumb, desperate panty-raids into classified facilities to try and protect him.”

Wilson then goes on an extended riff regarding the ridiculous staged event Rep. Matt Gaetz (R-FL) and other Trump loyalists in Congress held this week when they tried to barge into a classified impeachment hearing:

“The purpose of Gaetz and his frat rats wasn’t to bring the facts to light, or to expose some nefarious behavior by the Democrats and Republicans on the three committees leading the impeachment inquiry, who were in the SCIF hearing the testimony of yet another fact witness in what is now absolutely established as a quid pro quo in Donald Trump’s attempt to extort the Ukrainian government. Their dumb stunt — ‘light treason,’ as my friend Molly Jong-Fast calls it — wasn’t to pin down imaginary Deep State liars. It was a pathetic distraction, the work of a few minutes to try to put a Band-Aid on the boo-boo of Donald Trump’s fragile, shaken ego and confidence, all while compromising national security and attempting to intimidate witnesses.”

Things are getting so bad, Wilson notes, that even Senate Majority Leader Mitch McConnell (R-KY) may see the wisdom of booting Trump from office in order to try and save a GOP majority in the upper chamber:

“In the Senate, Mitt Romney is making trouble of the best kind, John Thune is signaling his unease, and Mitch McConnell refused to back Trump’s lie that he blessed the content of the infamous Zelensky call where the American tried to extort his Ukrainian counterpart. The polling and fundraising collapse in key GOP Senate races for 2020 has McConnell pondering the ultimate triage: saving the majority by sacrificing the President.”

Expect all of this to end badly for Trump and the Republicans, Wilson predicts:

“The panic in the Republican Party is palpable, and delicious. Trump will grow more angry that the Senate isn’t immolating itself to support him. The House GOP and the Trump media apparatus will demand louder noises, more distractions, more Trump-hadi tactics in support of a President who has already poisoned their future. It’s going to be loud, and very, very ugly.”

And just think: All of this may happen right around Thanksgiving and Christmas. That would certainly give the country something to celebrate.