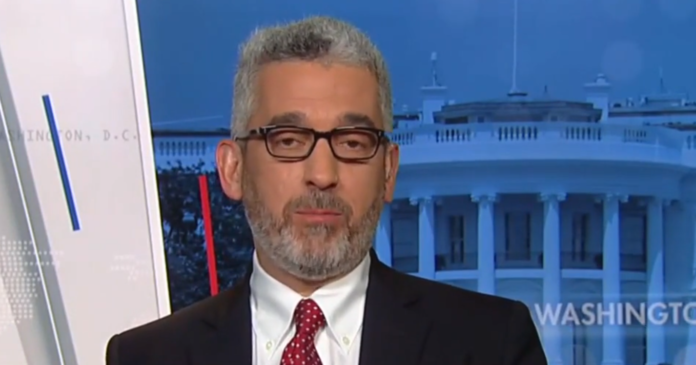 Chances are good that you’ve never heard of Lee Smith. He’s the author of a book entitled The Plot Against the President, which alleges that there’s a “deep state” conspiracy to remove Donald Trump from office via impeachment. He also says that Rep. Devin Nunes (R-CA) helped him uncover this so-called plot.

Smith appeared on the Fox Business show “Mornings With Maria” and told host Maria Bartiromo that the current impeachment inquiry being conducted in the House of Representatives is a “ritual,” and that a “cult” is behind the entire thing:

“I see it as a secret ritual conducted by a cult. I mean, they are doing most of this in secret.”

Of course, Smith conveniently neglected to mention that the rules being used for depositions of witnesses who have information regarding President’s Trump’s attempted shakedown of Ukraine for dirt on a political opponent were put in place by Republicans when they held the House majority.

Be sure and note Smith’s usage of the word “swamp,” which is a popular refrain among Trump supporters, even though the current president is among the swampiest of swamp creatures to ever inhabit the nation’s capital.

According to Smith, Trump is trying to do great things for the American people:

It makes you wonder why Trump acolytes and the president himself are so afraid of investigations and the impeachment inquiry when his call with the Ukrainian president was so “perfect,” to quote Trump. If Trump has nothing to hide, he should welcome a full airing of the facts, shouldn’t he?

As usual, since they don’t have facts on their side, the Trump-supporting chorus of right-wing bloviators are falling back on fantasy and lies to defend the indefensible actions of a lawless head of state.

Fox Business guest: “Here is how I see what we’re calling the impeachment process, inquiry — I see it as a secret ritual conducted by a cult … And I think it’s worthwhile thinking of Speaker Pelosi as the high priestess of the cult, and Adam Schiff as a high priest of the cult.” pic.twitter.com/g5vhE24qye