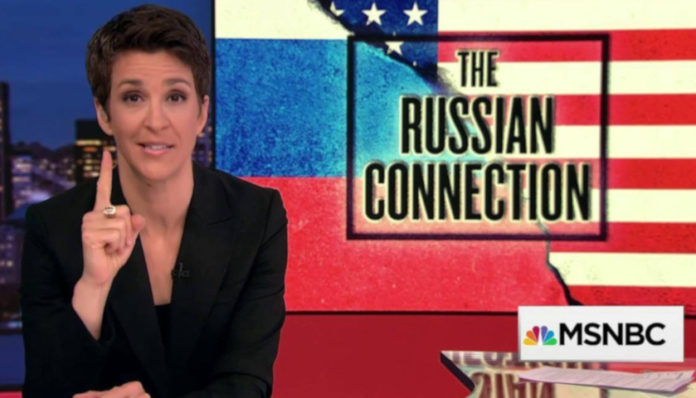 A right-wing news network that’s a favorite of President Donald Trump’s has filed a $10 million defamation lawsuit against MSNBC host Rachel Maddow for calling them “paid Russian propaganda,” according to Law and Crime:

The complaint alleges that Comcast — which owns MSNBC — refused to carry OANN on its airwaves because the conservative network “counters the liberal politics of its own channel, MSNBC.”

In response, Maddow addressed OANN’s pressuring of Comcast on her show:

Maddow apparently responded in turn, defending her own network’s owners by blasting OANN and telling her own audience the right-wing network “really literally is paid Russian propaganda.”

“Their on-air U.S. politics reporter is paid by the Russian government to produce propaganda for that government.”

Maddow’s comments were based on allegations that OANN reporter Kristian Rouz had also worked for Sputnik News, which is controlled by the Russian government. The lawsuit contains a statement from Rouz admitting that he did indeed write over 1,300 articles for Sputnik, but that since he did so as a freelancer, he was never actually an employee of Sputnik. A statement from Rouz notes, “I have never written propaganda, disinformation, or unverified information.”

In a statement, Skip Miller, an attorney representing OANN, defended the network, writing:

“One America is wholly owned, operated and financed by the Herring family in San Diego. They are as American as apple pie. They are not paid by Russia and have nothing to do with the Russian government. This is a false and malicious libel, and they’re going to answer for it in a court of law.”

Amy Wolf, an attorney for NBCUniversal News Group, said in an August 6 letter to lawyers representing OANN that the conservative network “publishes content collected or created by a journalist who is also paid by the Russian government for writing over a thousand articles. Ms. Maddow’s recounting of this arrangement is substantially true and therefore not actionable.”