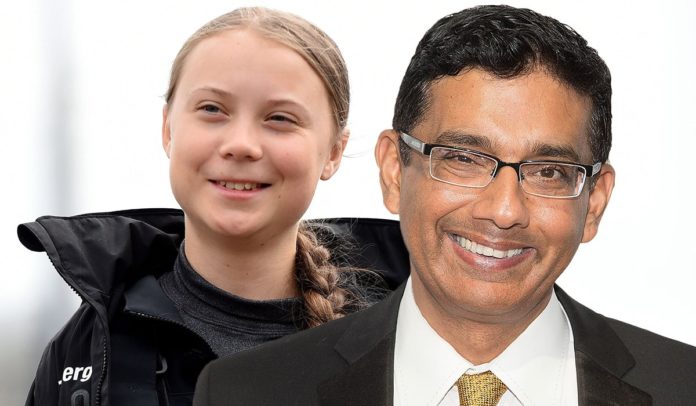 Right-wing commentator and convicted felon Dinesh D’Souza is getting slammed and mocked on social media after comparing teen climate activist Greta Thunberg to a Nazi on Twitter.

Thunberg, who has been nominated for the Nobel Peace Prize and is one of the most powerful voices in the debate over climate change and global warming, called for students across the globe to walk out of classes and protest last Friday in order to draw attention to the need for action on the issue of the environment. Millions did.

But D’Souza — a climate change denier — decided he’d go as low as he possibly could and attack a 16-year-old girl to the most murderous regime of the 20th century:

Children—notably Nordic white girls with braids and red cheeks—were often used in Nazi propaganda. An old Goebbels technique! Looks like today’s progressive Left is still learning its game from an earlier Left in the 1930s pic.twitter.com/E4q2KZ526s

That didn’t sit well with other Twitter users, and they wasted no time giving D’Souza a heavy dose of internet karma:

I’m actually extremely happy that a young girl hellbent on saving us all scares the shit out you, Dinesh… #GretaThunberg https://t.co/TXl8EO3KFT

Convicted felon Dinesh D’Souza comes from a long line of conservatives who say anyone who disagrees with them is a Nazi, while accusing liberals of doing the same. https://t.co/hHXmqskC8l

Sometimes, even if you pull the handle twice, a turd will turn out to be an unflushable floater. Meet Dinesh D’Souza. https://t.co/o5JDz9Mi8Y

Dinesh D’Souza is so rotten and fetid on the inside, fruit flies follow him everywhere. https://t.co/nA9Y5es0h6

Oh, this is a fun game. pic.twitter.com/ZaQhr7j8LL

I hope @Twitter suspends you for this hateful tweet. That sweet girl is fighting for her life because the orange shitgibbon is content to let the earth catch literal fire, you idiotic P.O.S.

Damn. You are TRASH.

Mein Kampf has an entire chapter discussing how the Left were enemies of the Nazis, in case you’d like to read something that would help you look less stupid in the future.

As a matter of principle I try not to despise other human beings, but I’m willing to make an exception for @DineshDSouza