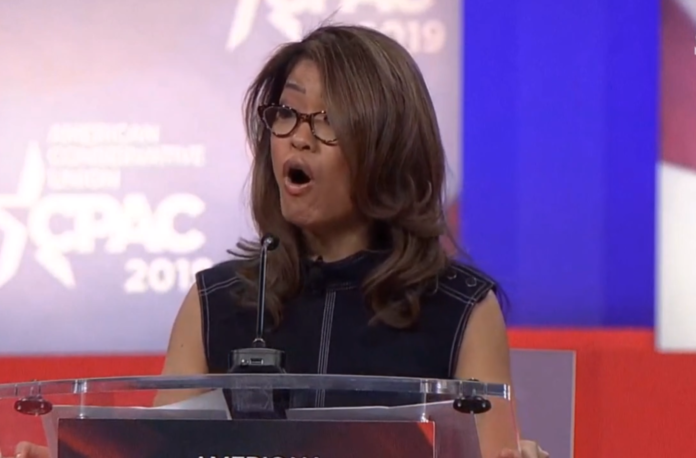 Extreme right-wing pundit Michelle Malkin told an enraptured audience at the 2019 CPAC conference that the United States is about to undergo a civil war, accusing liberals of attacking those who support President Donald Trump and his draconian policies.

Malkin, who is so far on the fringe of the far right that she’s been relegated to publishing her angry screeds on the white nationalist website VDARE, began her speech by telling attendees:

“Our enemies are both foreign and domestic.

“Inside our already flimsily defended borders, we are not at peace. Or rather, the radical left is not at peace with us.”

And then Malkin dialed up the fear mongering and talk of a civil war:

“From the comfort of TV green rooms and Beltway backrooms and corporate boardrooms and conference ballrooms, it may not look like civil war is imminent, but threats and outright violence against you – ordinary, law-abiding people – are now regularized features, not just random bugs, in these Disunited States.”

As if that wasn’t enough hatred for one speech, Malkin began ticking off incidents (most of which are pure fiction) she seemed to suggest were a justification for conservatives to take up arms:

“MAGA hat-wearers are being kicked off planes and assaulted in school hallways and restaurants,” she said, continuing her CPAC speech to a room that was hardly packed.

“Conservative speakers are being mobbed and Molotov-cocktailed. ICE agents and their families are being targeted. Pro-lifers are being kicked and menaced. Pro-Trump anti-jihad moms on social media are being monitored and doxed. The madness is beyond parody.”

In Malkin’s paranoid fantasy world, right-wing hate groups are the victims and have ever right to engage in domestic terrorism, which is on the rise across the nation.

Malkin ended her violent recitation by suggesting the divide in the country was all the fault of those who dare to oppose her or her right-wing comrades:

“Where are the sanctuary spaces for law-abiding conservatives who simply want to exercise their rights to free speech and peaceable assembly? The divide in this county is between decent people who stand up for America and dastardly people who want to bring America to its knees.”

As usual, conservatives are trying to pretend they’re the victims, but their endless calls for bloodshed and blantant hatred of anyone they disagree with speaks to much darker motives that prove why they have to be soundly defeated at the ballot box.