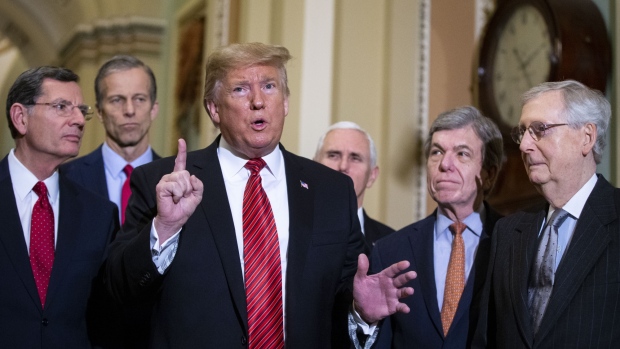 As the 2020 election draws closer by the day and the Ukraine scandal threatens to consume the Trump administration, Republicans in Congress are beginning to wonder what both the long and short-term damage will be as polls show a majority of Americans favor impeaching President Trump and removing him from office, according to the Hill:

Former Rep. Carlos Curbelo (R-Fla.), who served two terms in Congress before being defeated last November, told The Hill, “Republicans are coming to the realization that this is different than the Mueller probe. This is a lot more radioactive. They are coming to terms with the fact that there is real political risk here for members in swing states and swing districts.”

The White House has sought to push back against the growing public fervor for impeachment, suggesting that Democrats are trying to undo the 2016 election, but those efforts to brand the impeachment inquiry as illegitimate haven’t been resonating according to polling data.

An NPR-Marist poll released Thursday indicated that 52 percent of Americans back the impeachment inquiry, with 43 percent opposed. Independent voters had flipped within a few weeks from majority opposition to such an inquiry (50 percent to 44 percent) to majority support (54 percent to 41 percent).

Several other recent polls, from Ipsos, YouGov and Quinnipiac University, have shown rising support for impeachment. The Quinnipiac poll showed an outright majority (53 percent to 43 percent) supporting the inquiry and a sizable minority (45 percent) wanting Trump removed from office outright.

And then there’s the Fox News poll which came out earlier this week and showed that 51 percent of those surveyed saying Trump should be impeached and removed from office. A closer look at that poll shows that 57 percent of female voters are ready to dump Trump. Also, 12 percent of those who called themselves “Trump voters” agreed with the prospect of giving Trump the boot.

“NEVER had a good @FoxNews poll. whoever their Pollster is, they suck.”

But longtime GOP operatives say the poll numbers suggest that Trump is on shaky ground.

Rick Wilson, who has been highly critical of Trump, agreed with Tyler, remarking:

“Trump is indicting himself in these matters. He is saying the quiet part out loud, he is out there freely admitting what he did — ‘I called foreign governments to influence an American election.’”

Curbelo was asked he if would support Trump’s impeachment if he were still in Congress. He responded:

“I would certainly be supporting the inquiry. I think it is important to see [the outcome of] the inquiry before reaching a decision on articles of impeachment — and I think that applies to Democrats as well.”

As more damaging information comes out each day, it may be only a matter of time before many Republicans decide to cut their ties to Trump and toss him under the proverbial bus.