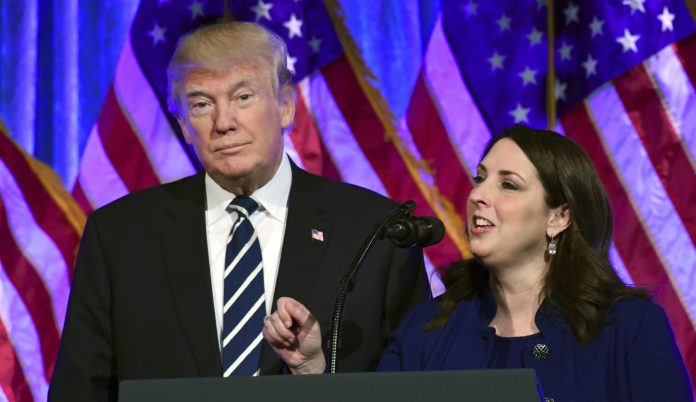 The reason Donald Trump is currently president can be traced to four Midwestern states: Michigan, Ohio, Pennsylvania, and Wisconsin. If Trump had lost two of those states, he would have been runner-up to Hillary Clinton.

Those four states will be in play again in 2020, and it’s starting to look like Trump is not in particularly good shape in the Midwest, where his trade war is hurting manufacturing and farmers.

When it comes to Michigan, even the chairwoman of the Republican National Committee, Ronna McDaniel, is sounding alarms over just how difficult it will be for the president to pull off victory in the state, telling the Detroit Economic Club on Monday:

“Michigan is going to be competitive, it’s going to be harder. You did same-day registration and you have a Democrat governor. It’s going to be a more difficult state, but we’re up for the challenge and I think we’re going to win Michigan.”

You also have the American auto industry hemorrhaging millions of dollars as Trump’s tariffs on China have raised the cost of the raw materials used to create every car made in this country. GM has laid off thousands and closed plants. Ford is restructuring and laying off thousands white collar workers.

Despite that, Trump has proven just how clueless he is by bragging that it will be “much easier” to win Michigan next year. Apparently he cannot read the polls, all of which show him with dismal approval ratings in the state, according to MLive:

Recent public opinion polling by Glengariff Group on behalf of WDIV-Ch. 4 and The Detroit News found Trump could face an uphill battle.

The poll found 54% of Michigan voters have an unfavorable impression of Trump, a figure which has hardly changed during the last two years but is worse among women and black voters. The poll found 51% of voters said they would vote for someone else, with former Vice President Joe Biden with the strongest support out of the possible Democratic challengers.

“The president … is saying ‘enough is enough, we’re not going to let our country be taken advantage of.’ I think he’s doing the right thing with China.”

But again, the polls show that voters don’t share that opinion:

The Glengariff poll found 47% of Michigan voters strongly believe Trump’s trade war with China is bad for the state. That’s nearly twice as many people compared to those who believe Trump’s strategy is good for Michigan.

The White House and RNC may try to put a happy face on their prospects in 2020, but right now the road for Trump’s re-election looks treacherous.