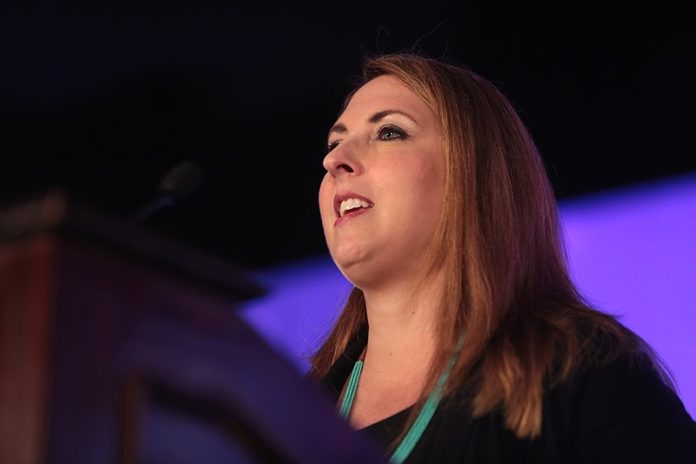 RNC chair Ronna McDaniel went on the attack against former Vice-President Joe Biden on Thursday after he announced his candidacy for president in 2020, only to see her tweets spectacularly backfire.

Even before Trump took office he was taking credit for former President Barack Obama’s economic successes, which included a rising stock market, a low unemployment rate, and 75 straight months of job growth after a brutal recession under the previous Republican administration nearly crippled the nation and the world.

And McDaniel continued to give Trump credit for Obama’s economy by using misleading statistics to attack Biden, who officially jumped into the Democratic primary race:

Biden chose Pennsylvania to launch his campaign – a state where the unemployment rate just dropped to the lowest level *ever recorded.*

In just over 2 years, @realDonaldTrump has created 453,000 manufacturing jobs.

That net loss occurred because of the Great Recession that began under former President George W. Bush. But after the bleeding stopped in 2010 because of Obama’s economic policies, the economy began to rebound and has continued to this day despite Trump’s trade wars, government shutdowns and tax cut blunders. In fact, the economy only added 20,000 jobs in February of this year because of Trump’s actions, and GDP for the year is set to plummet.

Needless to say, Twitter users wrecked McDaniel for daring to use the economy to attack Biden:

Let’s really keep score. Obama/Biden created 8.9 million jobs and turned around one of the worst economic downfalls in history.

Which party handed him the worst recession since the Great Depression? Don’t attack the doctor who made us better, go after the failed policies that made us sick in the first place.

Hey jarhead do we really have to break out the charts? I’ll start with manufacturing then. pic.twitter.com/kWfuyrhMLL

Trump has taken credit for an economy he had nothing to do with.

Do Republicans not get that the first 6 months of Obama Biden the country was deep in the Republican Recession losing 700k jobs a month? That Trump inherited a country adding jobs each month?

Trump is good at inheriting things

Largest Federal Deficit EVER and adding 2.2T to the National Debt To fund the #GOPtaxscam.

Lets show the real numbers Ms. Romney. You are once again cherry picking your facts and not stating the truth… which we all know the GOP have issues with telling the truth and spreading propaganda. pic.twitter.com/Oy72HclsBT

The economy gained a net 11.6 million jobs during the Obama/Biden years. And then there’s this: pic.twitter.com/kuRYOgN3e9