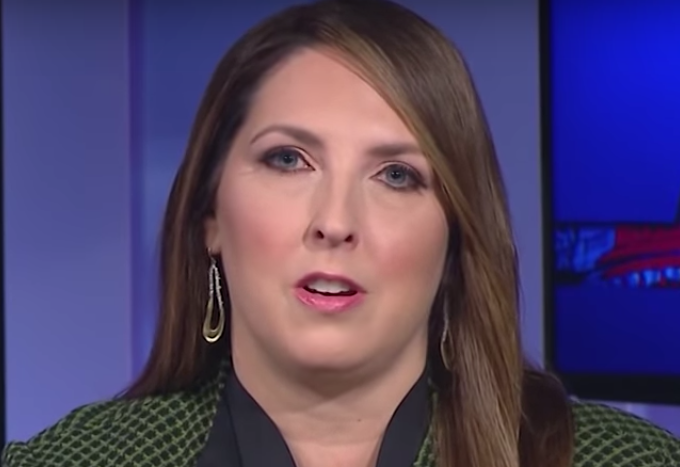 After Rep. Justin Amash (R-Mich.) became the first Republican in Congress to call for impeaching President Donald Trump, RNC chair Ronna McDaniel threw a hissy fit about it on Twitter.

On Saturday, Amash explained his decision after carefully analyzing the full redacted version of the Mueller report, which many of his colleagues refuse to read.

I offer these conclusions only after having read Mueller’s redacted report carefully and completely, having read or watched pertinent statements and testimony, and having discussed this matter with my staff, who thoroughly reviewed materials and provided me with further analysis.

Contrary to Barr’s portrayal, Mueller’s report reveals that President Trump engaged in specific actions and a pattern of behavior that meet the threshold for impeachment.

He would go on to cite the Constitution and urge impeachment in order to defend America’s institutions.

But McDaniel, a Trump shill who changed her own name to please him, lashed out at Amash for not bowing down to the “Dear Leader” in a Twitter tantrum in which she also lied about what Trump has done for America.

The only people still fixated on the Russia collusion hoax are political foes of @realDonaldTrump hoping to defeat him in 2020 by any desperate means possible.

Voters in Amash’s district strongly support this President, and would rather their Congressman work to support the President’s policies that have brought jobs, increased wages and made life better for Americans.

Trump inherited a rapidly strengthening economy from former President Obama, something McDaniel has been repeatedly reminded about on multiple occasions.

In response to her meltdown, Twitter users rained hell upon her yet again.

I have a question about Steve Wynn’s money. It seems you didn’t return it but instead took more of it.

She Who Will Not Use Her Given Name thinks well-reasoned conclusions are Dem talking points.

What’s sad is to see you and the rest of the Trumpers continuing to deny what is so obviously obstruction of justice!

He’s a lawyer who took a month to read and absorb the report. Did you? Also, he didn’t just repeat any talking points. He meticulously laid out his case. You’re a dishonest, partisan hack. Fix your life.

You’re fine with parroting as long as it’s to prop up your amoral, lying, cheating, illiterate, psychopathic wig stand of a poor excuse for a President. Congressman Amash isn’t the Trump sycophant that you and the rest of you deplorable Trunts are. Deal with it, you RWNJ.

It’s sad that the gop would attack any republicans that don’t fall to their knees in front of trump.

And speaking of Michigan voters, Trump happens to be ten points underwater in his approval in that state, which he won with a 0.23% margin.

So maybe Amash is not the one who faces the most risk of being rejected by Michigan voters.

Amash showed courage and integrity by calling for impeachment. That should be applauded. And he also happens to be right and laid out his case for impeachment only after carefully examining the report. If Republicans really cared about law and order, they would do the same.