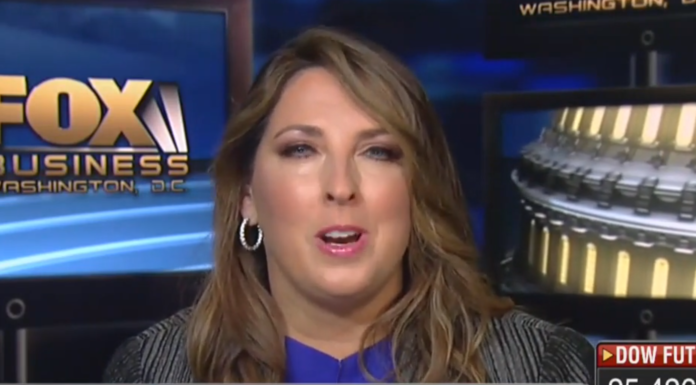 As President Trump visits France today to commemorate the 75th anniversary of D-Day, the chairwoman of the Republican National Committee (RNC), Ronna McDaniel, thinks we need to be “celebrating” Trump on this historic day.

We are celebrating the anniversary, 75 years of D-Day. This is the time where we should be celebrating our president, the great achievements of America, and I don’t think the American people like the constant negativity.”

.@GOPChairwoman: We are celebrating the anniversary, 75 years of D-Day. This is the time where we should be celebrating our President, the great achievements of America, and I don’t think the American people like the constant negativity. pic.twitter.com/FpGWbGMuX7

Celebrate Commander Bone Spurs? For what, exactly? Should we hold a parade because Trump has separated immigrant children from their parents and placed them in internment camps? Should we have a national holiday and wave flags to show how thankful we are that Trump has repeatedly tried to take health insurance from millions of Americans by destroying the Affordable Care Act? Or maybe we need to reflect on the enormous pride we feel that the current president has repeatedly obstructed justice and subverted the Constitution.

Like Memorial Day, it’s a solemn day of remembrance, not a frolicsome celebration. And it has nothing whatsover to do with HIM. ??

Why should we be taking the anniversary of D-Day to celebrate a man who had absolutely nothing to do with it?

I can believe that she said this. I cannot, for the life of me, believe that the GOP thought this insane comment was actually worth highlighting.

#CadetBoneSpurs doesn’t deserve to have his name associated with the valor and honor shown by true heros & patriots.

Yes, lest we forget the legendary BATTLE OF THE BONE SPURS waged by our fearless leader ?

Wow! What alternate reality did you brainwashed sycophants come from? btw As a former republican, just asking when you’re changing the name to the Trumpublican Party.

Celebrations are for heroes. And Donald Trump doesn’t qualify.