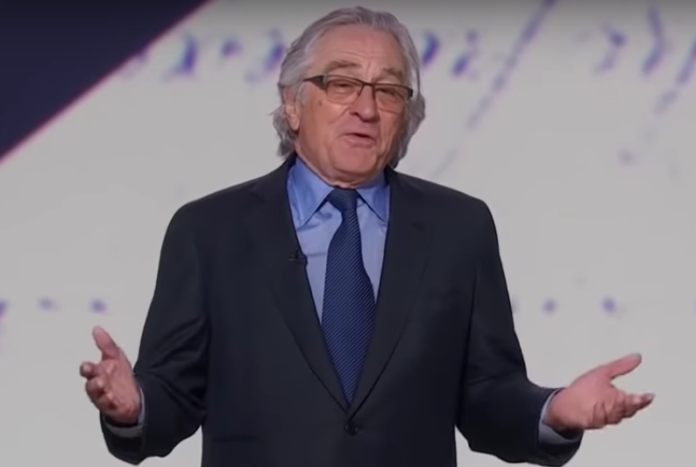 President Donald Trump refused to attend the event for the third straight year and this time ordered his staff not to attend, further widening the rift between his administration and the media. Trump and his team are butthurt little thin-skinned snowflakes because they can’t handle jokes about themselves.

Bee, however, didn’t give a damn about Trump’s sensitive fee-fees and introduced one of his strongest Hollywood critics to the stage.

“Since Donald Trump refused to show up tonight, we decided to invite someone who has at least played a crooked casino boss,” Bee told the crowd to introduce the legendary actor.

De Niro recently compared Trump to a gangster during an interview on “The Late Show with Stephen Colbert”.

“We have a wannabe gangster in the White House now,” he said. “Even gangsters have morals—they have ethics, they have a code, and you know, when you give somebody your word that’s all you have is your word, especially in that world. This guy, he doesn’t even know what that means.”

On Saturday, De Niro roasted Trump from a different approach.

“I just got to say, I f*cking love fake news,” De Niro began. “If I get a bad review, fake news! Some nosey reporter finds out I never finished high school, fake news!”

“Then the president stole my phrase,” he continued. “You might say he moved in on it like a b*tch. He ruined it. All that fake news, turns out, it’s real news. Or as we in this room call it, news.”

De Niro then urged everyone to vote out the “relentless unrepentant lying scumbag.”

“Impeachment or not, there will be an election,” he continued. “Unless Mitch McConnell can figure out a way to stop that vote too.”

“When you’re casting your ballot, imagine looking into Trump’s eyes — you’ll find them just above those creepy white puffy pouches — and saying, ‘you’re fired,’” he said in reference to Trump’s favorite catchphrase on his former reality television show.

“Something will come over you, you’ll feel an exquisite release and you won’t have to fake it,” he concluded.

The real White House Correspondents’ Dinner should book this man for next year immediately.