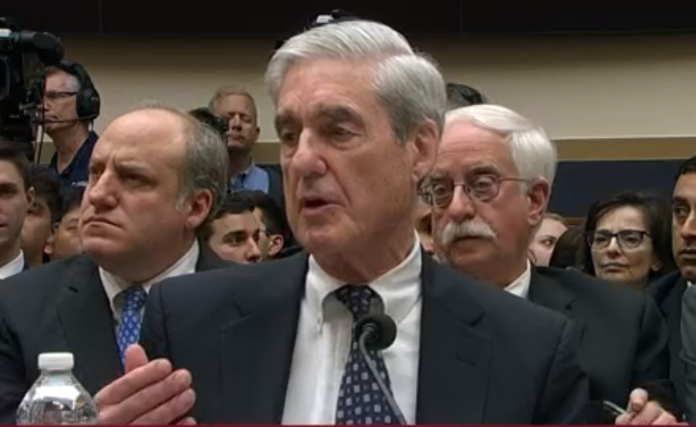 Ever since the report from Special Counsel Robert Mueller was completed and handed to Attorney General William Barr, President Donald Trump has repeatedly claimed that he has been completely exonerated by the Russia investigation.

But as Mueller himself explained Wednesday morning in his testimony before the House Judiciary Committee, his report did NOT exonerate the president.

“The president has repeatedly claimed that your report found there was no obstruction and that it completely and totally exonerated him. But that is not what your report said, is it?”

“Correct. That is not what the report said.”

Nadler then followed up:

“Did you actually totally exonerate the president?”

“The president was not exculpated for the acts that he allegedly committed.”

Shortly before Mueller’s testimony began, Trump railed on Twitter, suggesting that he was being wrongly accused of things he didn’t do:

So why didn’t the highly conflicted Robert Mueller investigate how and why Crooked Hillary Clinton deleted and acid washed 33,000 Emails immediately AFTER getting a SUBPOENA from the United States Congress? She must have GREAT lawyers!

NO COLLUSION, NO OBSTRUCTION!

It has been reported that Robert Mueller is saying that he did not apply and interview for the job of FBI Director (and get turned down) the day before he was wrongfully appointed Special Counsel. Hope he doesn’t say that under oath in that we have numerous witnesses to the…

….interview, including the Vice President of the United States!

Trump has not been exonerated by Mueller or the Russia investigation. The only reason he wasn’t indicted is because he’s a sitting president. But he can still be removed via impeachment.