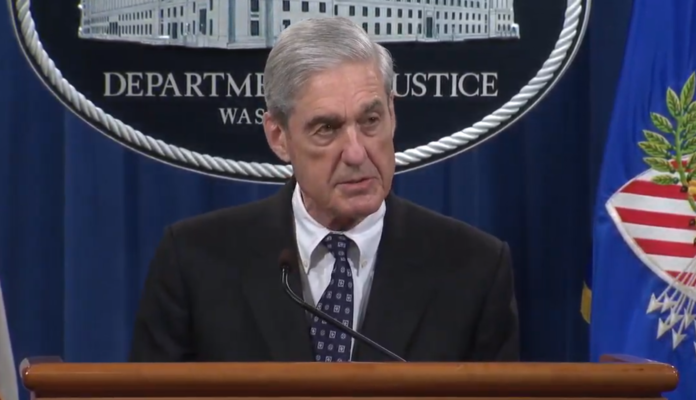 Five weeks after he completed his report, Special Counsel Robert Mueller stood Washington, D.C. on its head Wednesday morning with comments he made regarding his two-year investigation into the 2016 election and possible collusion between Russia and President Donald Trump.

Speaking at the Department of Justice, Mueller remarked that he didn’t clear Trump of crimes he may have committed, noting:

“As set forth in the report, if we had had confidence that the president did not commit a crime, we would have said so.

charging the president with a crime was not an option we could consider.”

The special counsel then went on to add that he was unable to charge a sitting president with a crime due to standing DOJ policy stating that such a move cannot be made.

However, Mueller did seem to hint that if Congress thinks there were criminal actions committed by President Trump, the remedy can only be found by impeachment, as set forth in the Constitution.

Later in his remarks, the special counsel made it clear that Russia did indeed interfere in the 2016 election with the intention of harming Democratic candidate Hillary Clinton, something Trump has repeatedly denied.

At the end of his comments, Mueller remarked:

“I will close by reiterating the essential allegation of our indictments that there were multiple systematic efforts to interfere in our election. That allegation deserves the attention of every American.”

That sounds very much like a warning that Russia will indeed try to attack next year’s presidential election. But as of yet, this administration has done nothing to prevent such an attack.

By stating that there was no “court” option to prosecute wrongdoing, Mueller was essentially giving Congress a green light to continue investigating and potentially bring articles of impeachment against Trump. He went out of his way to emphasize that there was only one other option — and we all know what that is.