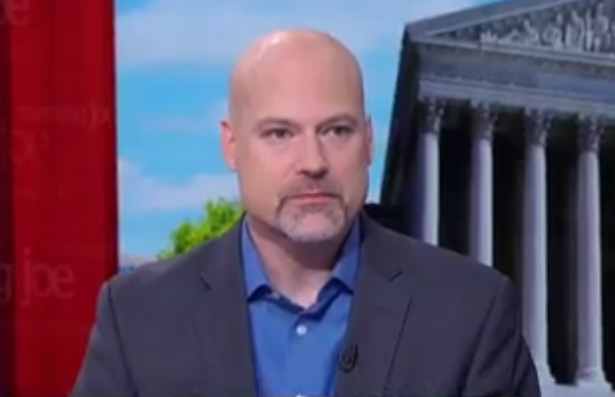 President Donald Trump would have been impeached already if he had been a Democrat, but the fact that Republicans control the Senate should not prevent House Democrats from impeaching him anyway, according to the man who used to deliver intelligence briefings to Special Counsel Robert Mueller.

David Priess is a former CIA staffer who promoted his new book “How to Get Rid of a President: History’s Guide to Removing Unpopular, Unable, Or Unfit Chief Executives” on Morning Joe on Wednesday.

Priess had high praise for Mueller, describing him as a hardworking law enforcement official who checks his politics at the door to get the job done, something he has brought with him as he investigates Russian collusion and obstruction of justice.

Trump’s multiple scandals and lies propelled Democrats to capture a clear majority in the House, which means they can subpoena Trump’s records and conduct their own investigations, after which, they can decide to impeach him or not.

The problem is that Republicans have the majority in the Senate, and they will undoubtedly refuse to convict Trump even if House Democrats vote for impeachment.

But that should not stop them from doing so anyway, Priess says, because an impeachment vote is still a major rebuke of the president. It’s a power House Democrats would be irresponsible to ignore considering Congress is supposed to act as a check on the executive branch. Impeachment would be a powerful message underscoring that constitutional responsibility.

“Let’s be clear — an impeachment vote can still happen,” Priess said. “The House can still impeach and not get a conviction. Since the Bill Clinton case that has been seen as a political failure, if you impeach and don’t convict it seems like the president wins. That’s not the way the founders meant it. Impeachment was meant itself to be a rebuke, a slap across the face.”

Indeed, Trump would likely lose his sh*t if Democrats voted to impeach him. Even if saved by the Senate, he would still go down in history as only the third president to be impeached.

But Priess pointed out that House Democrats can make Trump’s presidency more miserable than it already is.

“You can go well short of impeachment,” he explained. “One way is simply undermining the president legislatively and in other ways. With the Democrats controlling the House, this may happen. It happened many times in history where presidents were effectively removed in place, emasculated, because some of their powers were taken away from them.”

For instance, the House of Representatives has the power of the purse, which means they can defund many of Trump’s actions such as his immigration policies and restore funding to policies Trump has slashed such as Forest Service and firefighting funds.

Of course, Senate Republicans could reject such moves, but that would result in a government shutdown that Republicans and Trump would likely be blamed for.

“[T]here are ways of reining in a president that fall short of that constitutional method,” Priess concluded.

It should be pointed out that a majority of Americans, 42 percent, support impeaching Trump, which is similar to the percentage that supported impeaching Nixon, but far higher than the 29 percent who wanted Bill Clinton impeached.

Democrats clearly have the American people on their side should they choose to impeach Trump.