The United States Blues
Home News Robert Reich calls for Congress to have Barr arrested if he fails... 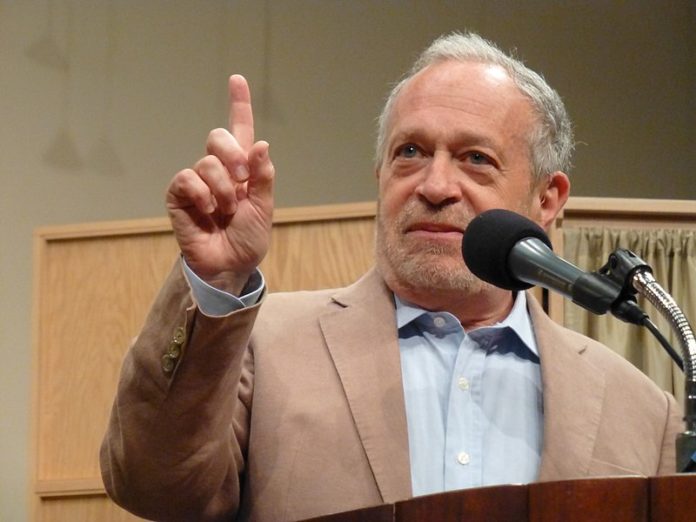 Former Labor Secretary Robert Reich called for Congress to have Attorney General Bill Barr arrested and jailed if he refuses to comply with subpoenas.

As President Donald Trump continues to stonewall Congress’ effort to conduct oversight of the executive branch, Barr is resisting requests to testify before the House Judiciary Committee and release the full unredacted Mueller report.

Barr certainly has plenty to answer for, including why he is acting as Trump’s personal defense lawyer and protector instead of doing his job as attorney general.

Indeed, the Mueller report listed at least ten instances of obstruction of justice Trump committed to sabotage a legitimate federal probe into Russian interference during the 2016 Election, yet Barr let him off the hook and excused his actions by boiling them down to Trump being frustrated and angry.

But it’s not just Barr who is refusing to cooperate with Congress, but many administration officials and the White House itself as Trump and his cronies seek to block the legislative branch from carrying out oversight duties entirely, whether it be over Trump’s taxes or what former White House officials told Special Counsel Robert Mueller.

Trump is even suing Deutsche Bank to prevent them from releasing his financial records.

Clearly, Trump has escalated the situation to the point that Congress has no choice but to hold Trump officials like Barr in contempt and have them arrested for refusing to comply, as House Judiciary Committee Rep. David Cicilline suggested last week.

Even a former Watergate prosecutor has said that Congress can have Treasury Secretary Steve Mnuchin arrested for breaking the law by refusing to hand over Trump’s taxes.

And Robert Reich made the same case for having Barr arrested in an op-ed on Tuesday.

Pointing out that Trump is acting like the dictator he has always wanted to be, Reich observed that Congress must use the full extent of their powers to fight back against his tyranny.

“What could the Committee do?” Reich asked. “Hold Barr in contempt of Congress—under Congress’s inherent power to get the information it needs to carry out its constitutional duties. Congress cannot function without this power.”

That’s true. Without it, Congress would not be able to provide a crucial check on the executive branch as outlined by the Constitution.

“Under this inherent power, the House can order its own sergeant-at-arms to arrest the offender, subject him to a trial before the full House, and, if judged to be in contempt, jail that person until he appears before the House and brings whatever documentation the House has subpoenaed,” Reich wrote.

And if Trump doubts this can happen, Democrats control the House and it wouldn’t take much to hold Barr in contempt, or any other administration official for that matter.

“Sadly, there seems no other way to get Trump to move,” Reich continued. “Putting the onus on the Trump administration to get the issue to the court as soon as possible is the only way to force Trump into action, and not simply seek to run out the clock before the next election.”

Reich concluded by laying out the precedent.

In a case that grew out of the Teapot Dome scandal in 1927, the court held that the investigative power of Congress is at its peak when lawmakers look into fraud or maladministration in another government department.

Decades later, when Richard Nixon tried to block the release of incriminating recordings of his discussions with aides, the Supreme Court decided that a claim of executive privilege did not protect information relevant to the investigation of potential crimes.

Trump’s contempt for the inherent power of Congress cannot stand. It is the most dictatorial move he has initiated since becoming president.

Allowing Trump to run out the clock until after the 2020 Election is unacceptable. The American people need to know the extent of his crimes and scandals now and the only way to do so is to force Trump and his minions to cooperate, even if it means putting most or all of them behind bars.