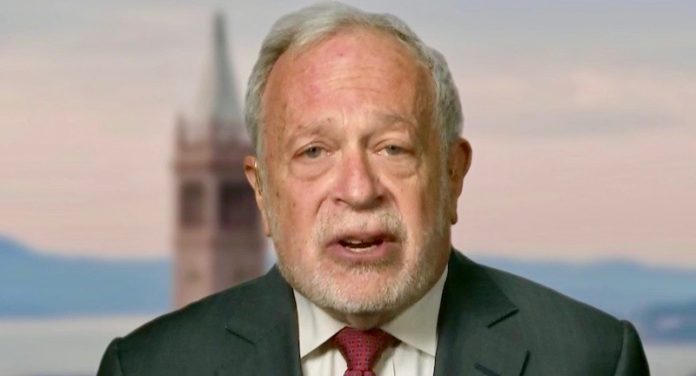 On Wednesday, the Dow Jones Industrial Average plummeted 800 points, the largest loss for the stock market so far this year, in reaction to growing fears that the Trump administration’s economic policies are plunging the U.S. into a recession.

Former Clinton administration Secretary of Labor Robert Reich noted on MSNBC that the “extremely dangerous” policies of President Donald Trump are on the verge of bringing everything crashing down, telling host Ari Melber:

“I think there are two big issues here. He (Trump) did not contribute to the fact that it’s a very, very long recovery. Long in the tooth. You get to nine or ten years and you’re almost definitely going to have a recession. But what he contributed to is, number one, this huge tax cut that was kind of steroidal lift, it was kind of a sugar high for the entire stock market that could not go on. It was temporary. Sugar highs are temporary.”

The trade war with China, Reich went on to explain, is one of the reasons things are so uncertain financially:

“The second thing is China. This trade war with China, not only is there no strategy, but it also is extremely dangerous. This is the largest and second-largest economies in the entire world. And to have them going at each other is dangerous for the whole world economy.”

Ultimately, however, Reich concluded, the buck stops with Trump, and that’s also a reason for great concern:

“This is the most unfocused president. This is a president who not only doesn’t know details, but he lies about the details he does know. No, there’s not going to be any focus. There’s no economic strategy. There’s nobody around him capable of even advising him and having him listen to on economic strategy.”

The American ship of state has no captain. We are afloat in dangerous waters and there are icebergs everywhere you look. What’s Trump’s reaction? He’s playing golf at his Bedminster club and tweeted out that the entire economic mess was all the fault of the Federal Reserve not lowering interest rates fast enough.

While the U.S economy burns, Trump cannot be bothered to put down his putter or cell phone to do anything.

Here’s the segment from MSNBC. The interview with Reich begins at the 19:20 mark: