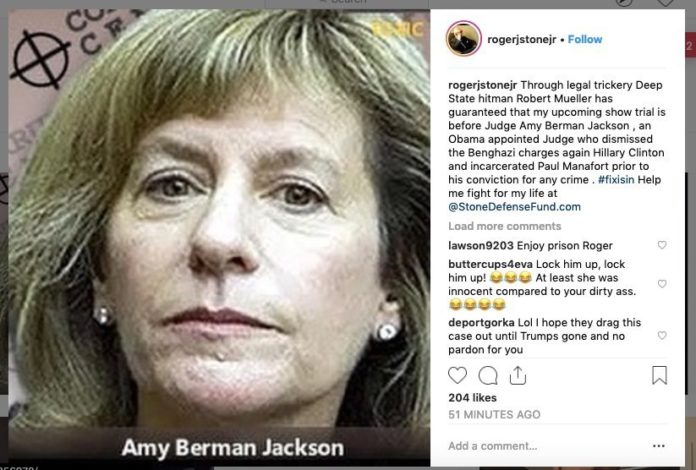 Roger Stone, a longtime friend and confidant of President Donald Trump, is already in big legal trouble when it comes to the Mueller investigation, and now he may have gotten himself into even greater jeopardy by posting a photo online that features the judge overseeing his case and crosshairs such as used on a gun target.

The image was later deleted, but not before BoingBoing.net was able to get a screenshot: 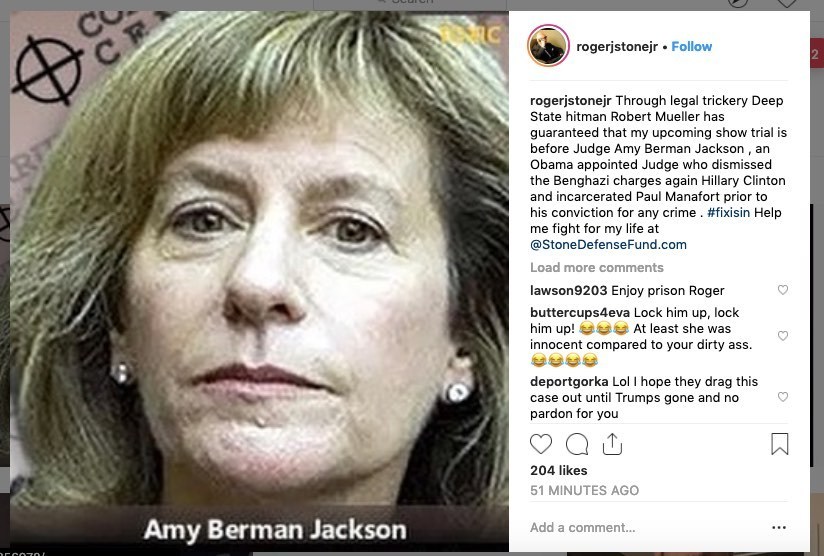 If indeed the posting is a threat to Judge Jackson, Stone could be charged and if found guilty, face 5 years in prison under section 18 U.S.C. § 115 of the U.S. Criminal Code.

Keep in mind that Stone was indicted in January on one count of obstruction of an official proceeding, five counts of false statements, and one count of witness tampering.

Got a notification for another Roger Stone Instagram post…it’s the judge presiding over his case. And in the upper left hand corner it looks like the symbol for crosshairs. pic.twitter.com/m6IW3QznTF

Anyone with even a passing familiarity of the far right Qanon fever swamp Stone swims in knows that he’s directly and knowingly putting this judge’s life in danger. Finding out where he got the image of the cross-hairs and the judge will be instructive. pic.twitter.com/GvKF4RV3GU

By the way, because it looks like it will come up again thanks to Roger Stone: no, you can’t get a new federal judge by insulting your current judge and then claiming resulting bias. https://t.co/NagrKmKeOY

This is going WAY too far, he needs to be put under a full gag order, at least, but a picture of the judge, with crosshairs next to her, should really cause him to be jailed immediately! What if some nutcase takes it as a request??? DANGEROUS.

A crosshair in the picture and prison in his future. He’s not untouchable like he thinks he is.

Stone is already under a partial gag order in the case, but after this moronic stunt, there’s a very real chance he will be jailed pending his trial.