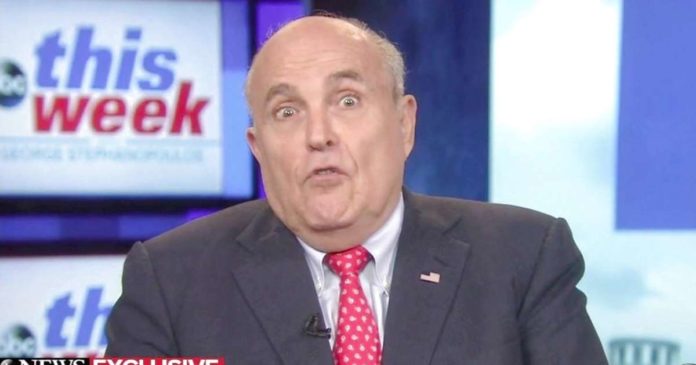 President Donald Trump’s attorney, Rudy Giuliani, has once again stepped into a major controversy with comments he made during an interview with The New Yorker.

Specifically, Giuliani seemed to confirm that there is indeed taped evidence which may be used against the president and that those tapes were possibly made by Trump’s former attorney and fixer, Michael Cohen.

Asked about his opinions on the BuzzFeed story which broke last week alleging that Trump had urged Cohen to lie in his testimony to Congress, Giuliani remarked:

“I guess the BuzzFeed story—I don’t remember what it said about Cohen—but it said there was corroboration that the President talked to Cohen and told him to lie about, I guess it was, the Moscow proposal.

“There are no tapes, there are no texts, there is no corroboration that the President told him to lie.”

Seconds later, however, Giuliani reversed himself:

“But I can tell you, from the moment I read the story, I knew the story was false.

The reporter, Isaac Chotiner, then inquired:

“Wait, what tapes have you gone through?”

Once again, Giuliani changed his story, denying any tapes exist:

“So, there were no tapes you listened to, though?”

Giuliani’s reply seems to suggest that there are indeed tapes:

“No tapes. Well, I have listened to tapes, but none of them concern this.”

Recent comments by Giuliani have reportedly upset top officials in the White House and on the president’s legal team. The New York Times reported Monday that those close to Trump are deeply concerned and exasperated by Rudy’s unhinged interviews and propensity for increasing the president’s legal exposure.