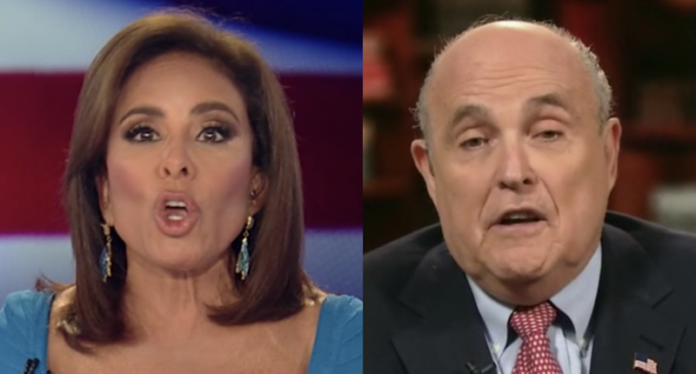 Now that President Donald Trump has expressed his view that Fox News should allow host Jeanine Pirro to be reinstated to her weekly show despite the disgusting anti-Muslim comments she made a few weeks ago, Rudy Giuliani has decided to join the president and call for the same.

Bring back @JudgeJeanine Pirro. The Radical Left Democrats, working closely with their beloved partner, the Fake News Media, is using every trick in the book to SILENCE a majority of our Country. They have all out campaigns against @FoxNews hosts who are doing too well. Fox …..

And on Friday evening, Giuliani joined the fray:

Bring Jeanine Pirro back. She has a distinguished career. She is a very successful author and a real lawyer and former judge and DA. Her views are well reasoned and command respect whether you agree with her or not.

Reportedly, Fox is reluctant to put Pirro back on the network because numerous advertisers have withdrawn their support and warned they don’t want to be associated with her in any way after she said this about Rep. Ilhan Omar (D-MN):

“Omar wears the hijab, which according to the Quran 33:59, tells women to cover so they won’t get molested. Is her adherence to this Islamic doctrine indicative of her adherence to Sharia law, which in itself is antithetical to the United States Constitution?”

It didn’t take long for social media to slap Giuliani down for his defense of Pirro:

She’s a clown judge and lawyer, just like you, Mr Clown Lawyer, sir. Her views were not well-reasoned and true, they were Islamophobic, offensive, and as bigoted as you can get. Best sit this one out, clowny.

Rudy, be quiet. The adults are talking.

This is not Tinder, sir.

Here’s a thought: Maybe Rudy and Jeanine can get a show of their own and it can be broadcast on Comedy Central. That’s gotta be good for some laughs.