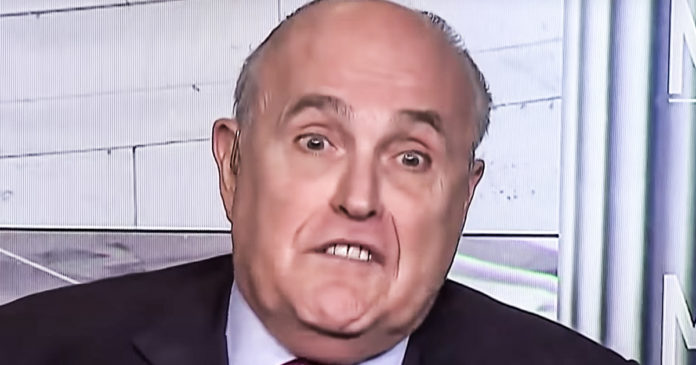 According to Rudy Giuliani, who serves as a part-time attorney and full-time shill for President Donald Trump, the president’s tweets provide more than enough evidence that there was no obstruction of justice as it relates to the investigation being conducted by Special Counsel Robert Mueller.

Speaking with Jonathan Swan of Axios, Giuliani claimed that any questions the special counsel may have regarding obstruction have already been addressed by Trump:

“[A]ny question he has on obstruction, … [t]he president has given [the answers] in interviews, tweets. Other witnesses have given it to him.”

If Mueller does attempt to subpoena the president for further testimony, Giuliani predicted the special counsel would lose in court:

“I think that he would not win a legal battle if he did that, and I think it would consume months.”

Giuliani also said that if Mueller tries to charge Trump with obstruction, he would never be able to make such a case because of executive privilege:

“I don’t think he has any way to compel testimony on obstruction because the argument of executive privilege would be very, very strong. It all relates to a period of time after he was president.”

“I don’t see what for. The meeting turned out to be a big bust. … It’s a very unattractive crime [for a prosecutor] when somebody meets with you and then you don’t do anything.”

Giuliani also seemed to contradict Trump’s bragging that he himself had answered the written questions from Mueller without any assistance from his legal team:

“Giuliani said that he and fellow Trump lawyers Jay Sekulow and Jane Raskin sat with Trump whenever they could grab him, in the Oval Office and in the president’s private dining room adjoining the Oval.

“They didn’t tape — the lawyers took handwritten notes of Trump’s answers before having them typed up.”

While Giuliani attempted to put a happy face on the fact that his client in the clear legally, the facts suggest otherwise, and it remains to be seen how exactly the president will respond if he’s named as an unindicted co-conspirator and compelled to testify before a grand jury.