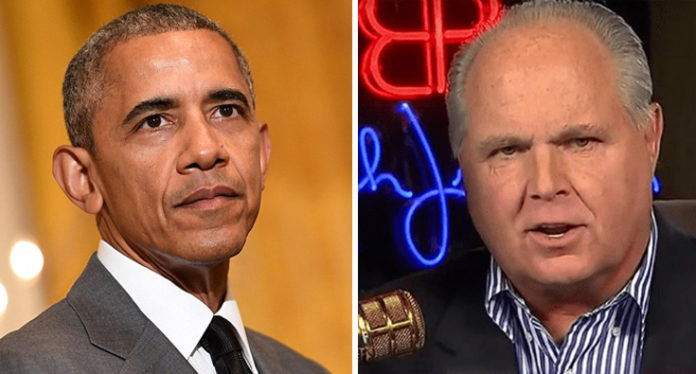 For eight straight years, right-wing radio host Rush Limbaugh complained that then-President Barack Obama was endangering the economic future of the United States by running massive federal budget deficits. But now that President Donald Trump is doing the same, Limbaugh admits that his criticism of Obama was “bogus.”

On his radio show this week, a caller told Limbaugh that Republicans should nominate a young fiscal conservative instead of Trump, and he pointed to the rising deficit under the current president as a reason to replace Trump:

“Republicans can nominate a young, potentially two-term president, one that believes in fiscal conservatism. We’re gonna have — in 2019, there’s gonna be a $1 trillion deficit. Trump doesn’t really care about that. He’s not really a fiscal conservative. We don’t, we have to acknowledge that Trump has been cruelly used.”

And that’s when Limbaugh let the proverbial cat out of the bag:

“Nobody is a fiscal conservative anymore. All this talk about concern for the deficit and the budget has been bogus for as long as it’s been around.”

As Igor Derysh of Salon points out, some of Limbaugh’s most virulent rhetoric during the Obama years dealt with deficits and the national debt:

In 2009, Limbaugh ranted that Obama was a “coward” without the “spine” or “gonads” to admit he was responsible for driving up the deficit (rather than the two wars President George W. Bush started while cutting taxes).

In 2011, Limbaugh bizarrely claimed that Obama was “the architect of deficits and debt unheard of in this nation.”

When he was running for the White House in 2016, Trump promised that he would eliminate the deficit and the $22 trillion debt within eight years, telling Sean Hannity:

“It can be done. … It will take place and it will go relatively quickly. … If you have the right people, like, in the agencies and the various people that do the balancing … you can cut the numbers by two pennies and three pennies and balance a budget quickly and have a stronger and better country.”

Instead, Trump is on pace to add $5.088 to the debt in just his first term! That’s a 30 percent increase from the $20.245 trillion debt at the end of Obama’s last budget for FY 2017. And should Trump manage to get a second term in office, he would add $9.1 trillion to the national debt.

But Limbaugh was far from done proving that he and the vast majority of so-called “fiscal conservatives” are hypocrites and liars, adding:

“How many years have people tried to scare everybody about the deficit? The years, how many decades of politicians tried to scare us about deficit the national debt, the deficit, any number of things. And yet, here we’re still here and the great jaws of the deficit have not bitten off our heads and chewed them up and spit them out.”

Lies and the lying liars who tell them. Right, Rush?