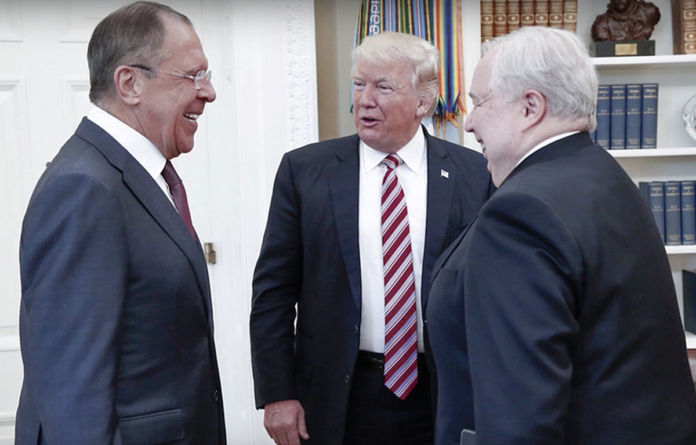 Attorney General William P. Barr’s summary letter of the Mueller report landed on the world with a dull anticlimactic thud on Sunday. While the Democrats are left stunned that Barr says Mueller found no collusion and could not exonerate Trump on obstruction, journalists and members of Congress are skeptical, calling for the release of the full report to the public. Meanwhile, Russia seems to be celebrating along with Trump, who, of course, has claimed Barr’s letter fully exonerates him.

There weren’t thousands of Muslims celebrating 9/11 in New Jersey, as Trump claimed, but there are many Russians celebrating as Bill Barr presumes to clear Trump from the Russia scandal.

The Washington Post was watching as Russian officials and public personas took a “victory lap” along with Trump. Kremlin spokesman Dmitry Peskov chided the West for conducting a fruitless search, citing a Chinese philosopher.

“‘It is hard to find a black cat in a dark room, especially if it is not there.’ ”

“Centuries have passed, but unfortunately there has been no understanding of this on the other side of the ocean,” Peskov said.

Peskov’s sentiment was echoed by Russian state TV, which called the investigation “useless.”

Lawmaker Alexey Pushkov, a foreign affairs specialist in the upper house of parliament, went much further than just enjoying a victory lap with Trump. He suggested the Democratic party’s hopes would be dashed and that it was the American media who conducted a conspiracy, not Trump and Russia.

“Some Russian politicians went further in taking a victory lap. They echoed the rhetoric of Trump allies in the United States, declaring that Barr’s letter was the death knell for Democrats’ and the news media’s efforts to harm Trump’s presidency.”

Pushkov “described Mueller’s findings as exonerating Trump in the face of a ‘virtual conspiracy”’of American news media and Democrats that was aimed at demonizing Russia.”

Pushkov Tweeted that “only an idiot” can believe the American media following Barr’s letter.

As you can see, we once more see the Russians and Trump expressing similar sentiments about the free press. It’s true that journalists in America and around the world have carefully exposed and cataloged the Trump campaign’s curious behavior and interactions with Russia from the beginning.

For example, the D.C. bureau chief of Mother Jones, David Corn, has compiled a comprehensive list of known ways that “Trump aided and abetted Russia’s attack” on the 2016 presidential election. While it may not rise to the level of a crime, it was most definitely “treachery” of the highest magnitude.

Corn explains a few of the facts below:

I still don’t see anyone who can dispute these basic points. https://t.co/1qC2SUVxkG

Author Greg Olear, who has written extensively about the Trump/Russia investigations, outlined glaring issues with Barr’s summary letter. In order to clear Trump on coordination and obstruction with Russia, one would have to negate a jaw-dropping array of shocking events.

Just one of the particularly troubling events that Barr seems to be clearing Trump on:

“IT WASN’T COORDINATION OR OBSTRUCTION when Trump met with Kislyak and Sergei Lavrov, the chief FSB spy in the US, in the Oval Office the day after he fired James Comey for Russia-related reasons—and at Kushner’s urging.”

20/ IT WASN’T COORDINATION OR OBSTRUCTION when Trump met with Kislyak and Sergei Lavrov, the chief FSB spy in the US, in the Oval Office the day after he fired James Comey for Russia-related reasons—and at Kushner’s urging.

As you can see, the publicly-compiled information from journalists makes it impossible to reasonably conclude that Trump should be “exonerated,” especially since the full Mueller report is still in the dark. Even more disturbing, we can reasonably conclude that even if the Mueller report never reaches the public, the majority of Americans will still find that the 45th president remains a present danger to this country – one embraced by Russia and Republicans alike.