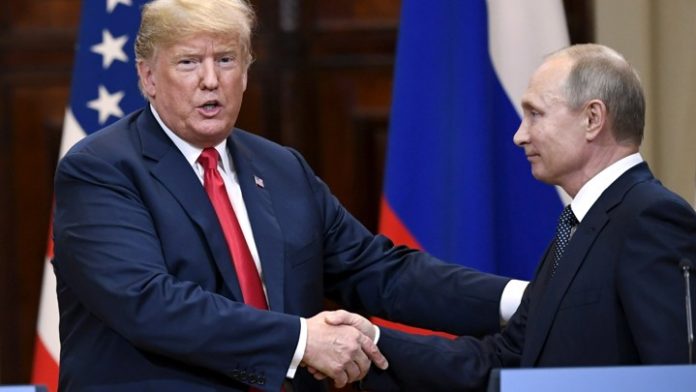 President Donald Trump had yet another previously undisclosed meeting with Russian President Vladimir Putin last year at the G20 summit in Buenos Aires. No American translator or other White House officials were present at the meeting.

The Financial Times reports that a Kremlin official said the meeting lasted more than 15 minutes and included a discussion of issues including the conflict in Syria and Russia’s aggression towards Ukraine, which included the seizure of two Ukrainian naval vessels.

There were four people present at the secret meeting: Putin, Trump, a translator working for the Russian government, and First Lady Melania Trump:

“The four of them sat at a table and were among the last to leave.”

The revelation from the Kremlin comes as Russia has warned the United States not to interfere in Venezuela, where the Trump administration is backing the opposition leader, Juan Guaido, who recently lost an election to the incumbent leader, Nicolas Maduro. The U.S. maintains that Maduro stole the election.

As Vox points out, the fact that Trump wasn’t accompanied by any American note takers or translators is especially troubling:

“There are two major problems with Trump’s continued and ill-advised conduct.

“First, the optics. Trump continually finds ways to meet with Putin privately. That’s a really bad look when you consider the fact that US intelligence says the Russian directed a sophisticated campaign to help Trump win the White House, not to mention special counsel Robert Mueller’s probe into possible Trump-Russia ties during the 2016 presidential campaign.

“But second, and more importantly, we’ll never really know what happened during the Trump-Putin chat since only four people were there.”

Also concerning is the fact that Trump neglected to disclose the G20 meeting, suggesting that he didn’t want anyone to know it had taken place. But from a national security standpoint, such a meeting is yet another secret that the Russians can hold over Trump’s head, meaning they have the potential to blackmail the president.

Former CIA analyst Ned Price said Tuesday on “All In” that the Kremlin’s revelation of the meeting proves they are intent on controlling Trump and U.S. foreign policy:

“That leads me to believe this might be the work of the Russians themselves, trickling this out — almost trolling President Trump — reminding him again and again that we have stuff we can hold over your head, let’s work together and how about you find way to make our policy wishes come true or we can make your life more difficult.”

Can there be any further doubt that Donald Trump is a clear and present danger to the United States?