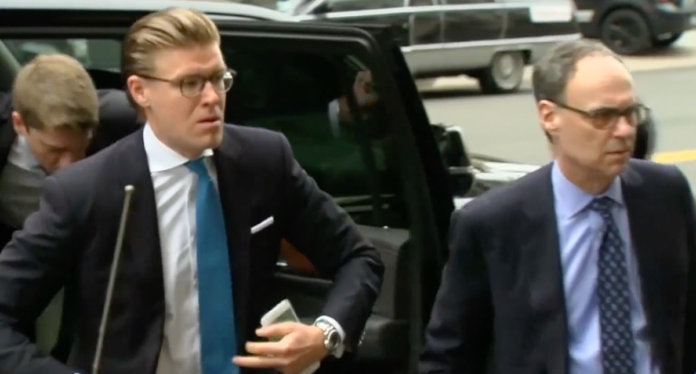 Although Dutch Lawyer Alex van der Zwaan may not have any information valuable to Special Counsel Robert Mueller, he is the first of Mueller’s targets in the sprawling Russia investigations who received a one-month sentence and $20,000 in fines in spite of his objections to serving jail time.

He is the son-in-law of an oligarch tied to Putin, and he is going to jail, followed by two months of supervised release and probable self-deportation.

“This is not something that happened to him. This was something he did.”

Van der Zwaan is a highly significant figure, as the son-in-law of a Russian oligarch close to Vladimir Putin and named in the Steele dossier, German Khan. The oligarch sued Buzzfeed News for the publication of the dossier.

Khan is one of the wealthiest men in Russia, a founder of Russia’s Alfa Bank, and once referred to “The Godfather” as a “manual for life,” according to The New Yorker.

The Steele dossier alleged that Alpha Bank and Putin carried out political and legal favors for each other and that two other Alfa Bank founders informally advised Putin on foreign policy with the United States, all of which they deny.

Another significant aspect of this sentencing: It sends the message that “You can’t lie to the Special Counsel.”

WATCH: Unlike in the case against Gates, Flynn and Manafort, Robert Mueller does not need Dutch Lawyer Alex van der Zwaan to cooperate.@PeteWilliamsNBC : "This was a punitive sentence to send the message that you can't lie to the special counsel." pic.twitter.com/6WrGBOdxi0

Yet another highly significant part of this story: Alex van der Zwaan ties the Trump campaign directly to the Kremlin.

The young lawyer is facing jail time because he lied about his phone calls during the Trump campaign between Trump deputy campaign chairman Rick Gates and a former Russian intelligence officer known only as “Person A” who we know is tied to the Kremlin intelligence agency that hacked the DNC.

Van der Zwaan’ sentencing memos reveal that he lied to:

“…Shield the fact that he secretly recorded conversations with Gates, Person A, and another lawyer at his firm.”

Even though he knew Person A was Russian intelligence, he was considering quitting his job at his law firm to work for Paul Manafort and Gates anyway. It must have sounded highly lucrative and/or politically valuable for him to consider that move.

It also must have been naive to think that his ties to the Kremlin wouldn’t be a red flag or a problem, but this is the Trump administration, after all.

The small fine will likely be just a small slap on the wrist for a relative of one of the richest oligarchs in Russia. The prison sentence, however, is something else for an affluent and educated lawyer. His lawyer tried to appeal to the judge to recommend sending him to a federal prison complex in Allenwood, Pennsylvania, but the judge indicated that prisoners in DC with brief sentences might be required to stay in the D.C. Jail. The judge said:

“This glass was dropped on a very thick carpet, and that cushioned the blow.”

As Van der Zwaan arrived for sentencing on Tuesday, he was greeted by a protester shouting, “Lock him up!” The protester also carried a sign reading, “Hey Putin! Whack anyone today?”