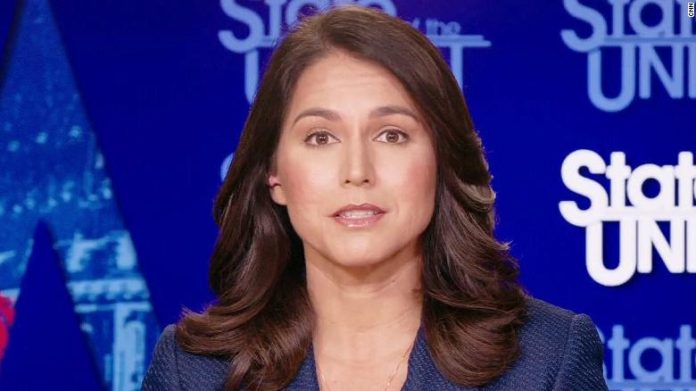 Rep. Tulsi Gabbard (D-HI) will formally announce that she’s a candidate for the 2020 Democratic presidential nomination on Saturday, but it appears that she already has the full support of Russian state TV.

“An NBC News analysis of the main English-language news sites employed by Russia in its 2016 election meddling shows Rep. Tulsi Gabbard of Hawaii, who is set to make her formal announcement Saturday, has become a favorite of the sites Moscow used when it interfered in 2016. Several experts who track websites and social media linked to the Kremlin have also seen what they believe may be the first stirrings of an upcoming Russian campaign of support for Gabbard.”

NBC closely monitored stories on RT, Sputnik News, and Russia Insider, all of which are under direct control of the Kremlin, noting:

“RT began defending Gabbard as soon as she announced.

“All three sites celebrated Gabbard’s announcement, defended her positions on Russia and her 2017 meeting with Syrian President Bashar Al-Assad, and attacked those who have suggested she is a pawn for Moscow.”

Ex-FBI agent Clint Watts said the push from Russian media is clearly meant to prove that Russia has every intention of trying to influence the results in both American political parties:

“They’re telegraphing what’s coming the next two years, which is playing in the left. They want someone like Gabbard to voice a Russian position. They are not telling her what to say but they want her pro-Russian positions play into the debate.”

The Russian effort is also being conducted on U.S. soil:

“On Jan. 16, Lee Stranahan, one of the co-hosts on ‘Fault Line,’ a Washington-based program on Sputnik News, admitted that the debates should be the focus for Gabbard.

“‘The significant thing about her being in the race is because one of her main issues is peace and specifically on Syria, where she is telling the truth on Syria,’ said Stranahan, who joined Sputnik after stints at Breitbart News, the right-wing news site. ‘I think she is going to change the debate. If she can get through the first few months, and make it to actual debates, is there a big millionaire or billionaire that will support Tulsi Gabbard.'”

On Russian websites, Gabbard is described as a “rebel,” who is “straight-talking” and a “heroic” candidate who will “shake up” the Washington establishment. Those same terms were used by Russian state TV to describe Donald Trump in the run-up to the 2016 election.

Erika Tsuji, a spokeswoman for Gabbard, said it’s ridiculous to suggest that the congresswoman has the Kremlin’s support:

“Russia would never overtly support a candidate they wanted to help, because it would just hurt their candidacy. It’s common sense.”