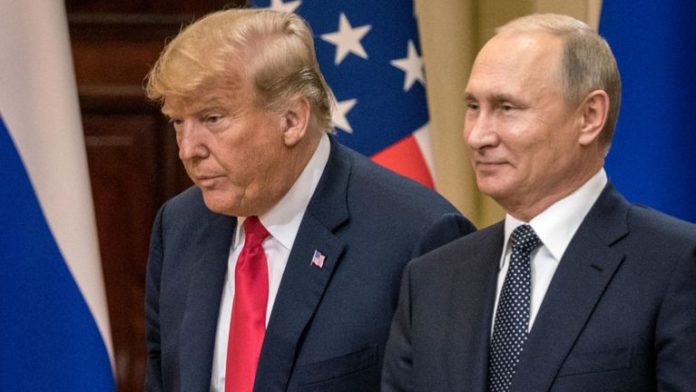 Even though they see him as a “clown” who is laughed at , mocked, and ridiculed around the globe, Russia is delighted to have Donald Trump as the current U.S. president, and they’re especially delighted that he’s been busy destroying American ties to our NATO allies.

In an article she wrote for The Daily Beast, Russia expert Julia Davis notes that Russian state TV has been mocking Trump for his failure at the recent nuclear summit he held with North Korean leader Kim Jong Un while also celebrating the way Trump is steadily pulling away from longtime strategic allies, with host Dmitry Kiselyov commenting:

“Trump miraculously managed to worsen relations on all fronts: with the European Union, China, Russia. Total failure in Syria. The same with Turkey. Failure with Iran and failure with Venezuela. Nothing but failures at every turn… Trump, who calls himself the ‘master of the deal,’ left Vietnam empty-handed.”

Konstantin Asmolov, an expert from the Center for Korean Studies, also mocked Trump, saying no foreign leader is willing to make a deal with a man who is likely going to lose his re-election effort in 2020:

“If Kim conceded anything [to Trump], then Trump’s successor might say that everything that this clown [Trump] has signed was not in our national interests and then Kim would end up in Gaddafi’s position.”

And while Trump walked away from his second summit with Kim, the president got nothing for his efforts. North Korea, however, got much of what they wanted:

“Ahead of the Hanoi talks, the United States dropped its demand for full accounting of North Korea’s nuclear weapons and ballistic-missile programs.”

That longtime U.S. demand for a full accounting of North Korea’s arms is also a major victory for Russian president Vladimir Putin, along with an end to joint U.S.-South Korea military exercises, which Trump also capitulated on, claiming such exercises were too costly.

So who won what in Hanoi? As usual, it sure as hell wasn’t Donald Trump, Davis concludes:

“The Hanoi summit turned out to be a golden propaganda opportunity and a win-win situation: for Russia and North Korea.”

Clearly, Russia is delighted with their handpicked American president.