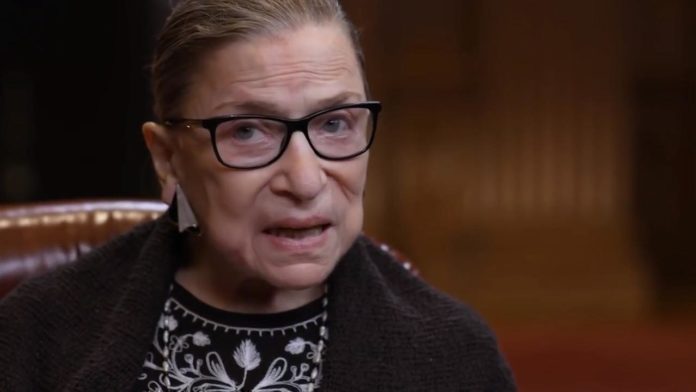 Supreme Court Justice Ruth Bader Ginsburg has a message for anyone who thinks she may be stepping down from the highest court in the country anytime soon: She’s not going anywhere.

During an extensive interview with NPR, the 86-year-old Ginsburg noted that a senator suggested she would be dead soon:

“There was a senator, I think it was after my pancreatic cancer, who announced, with great glee, that I was going to be dead within six months. That senator, whose name I have forgotten, is now dead himself, and I … am very much alive.”

Ginsburg also noted that retired Justice John Paul Stevens, who passed away last week at the age of 99, had been an inspiration to her and she hoped to be on the high longer than he was:

“I said that my dream is that I will stay at the court as long as he did. And his immediate response was, ‘Stay longer!’”

Does Justice Ginsburg favor suggestions from some 2020 Democratic presidential candidates that more justices should be added to the Supreme Court? She made clear she doesn’t:

“Nine seems to be a good number. It’s been that way for a long time. I think it was a bad idea when President Franklin Roosevelt tried to pack the court.”

Asked how she manages the work load of her job, Ginsburg said her work is what motivates her:

“The work is really what saved me, because I had to concentrate on reading the briefs, doing a draft of an opinion, and I knew it had to get done. So I had to get past whatever my aches and pains were just to do the job.”

Does Justice Ginsburg think the current conservative tilt of the court will roll back protections for gender equality, something she’s spent her life fighting to advance?

“I don’t think there’s going to be any going back to old ways.”

We can all hope that Justice Ginsburg is on the Supreme Court for many years to come. Long life, RBG!