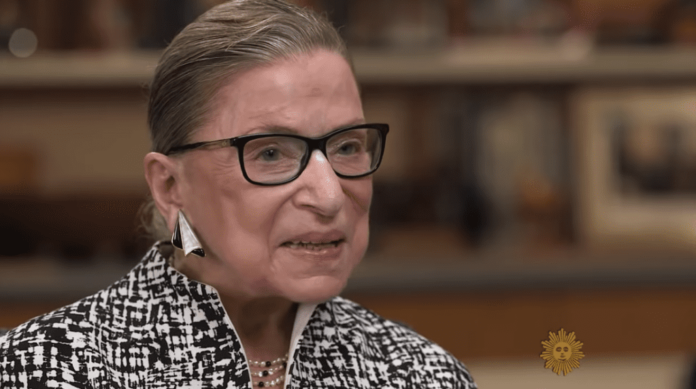 During an appearance at a judicial conference Friday evening, Supreme Court Justice Ruth Bader Ginsburg hinted that some of the upcoming decisions from the high court will be divisive ones that are likely decided by narrow 5-4 votes.

Perhaps the most closely-watched case before the court involves the 2020 census and whether or not a question about U.S. citizenship comports with the Constitution, HuffPost reports:

The census case revolves around the Trump administration’s effort to add a question on the 2020 form asking every American household to identify the citizens and non-citizens among them. The administration has argued it needs to ask the question in order to compile better data to enforce the 1965 Voting Rights Act.

A federal judge in New York blocked administration officials from adding the controversial citizenship question, ruling that the process used by Commerce Secretary Wilbur Ross to include the query violates the Administrative Procedure Act. Groups such as the ACLU and Common Cause argue that asking about a person’s citizenship would directly discriminate against Latinos and cause them to be underrepresented in the overall count.

Asked about that case Friday, Justice Ginsburg made reference to another case the Supreme Court heard, Trump v. Hawaii, in which the court ruled by a 5-4 margin that the Constitution gives “great deference to the Executive. She added:

“Respondents in the census case have argued that a ruling in Secretary Ross’s favor would stretch deference beyond the breaking point.”

Indeed, since the commerce secretary is merely a presidential appointee and not elected to the post, the court may rule that only Trump has the authority to make such wide-reaching decisions. But with a court that already tilts heavily to the right, the 5 more conservative justices might decide to rule in favor of the administration, which would mean the 2020 census would not be an accurate count of every person living in the country.

Two other cases before the Supreme Court are also being closely monitored by court watchers, according to HuffPost:

Among the other closely watched cases will be the court’s ruling on the constitutionality of partisan gerrymandering, a practice by which lawmakers set boundaries for electoral districts to ensure their party’s candidates win more races.

The Supreme Court will also be ruling in Flowers v. Mississippi, a case detailed in the popular “In The Dark” podcast. In that case, the justices will decide whether Mississippi’s highest court properly applied a Supreme Court precedent in determining whether people were unconstitutionally kept off a jury on the basis of race.