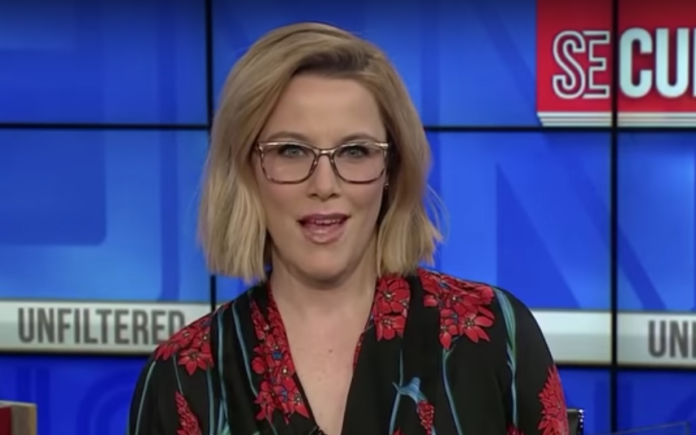 Conservative CNN host S.E. Cupp took President Donald Trump to the woodshed on Saturday night after he agreed to end the shutdown without wall funding.

For 35 days, Trump refused to cave unless he got $5.7 billion for his ineffective vanity project at the southern border, only to do exactly that on Friday by signing a bill to reopen the government for the next three weeks.

But not even a day went by before Trump took to Twitter to insist that he did not cave and once again threatened the shut the government down in three weeks if Congress doesn’t let him have his way:

I wish people would read or listen to my words on the Border Wall. This was in no way a concession. It was taking care of millions of people who were getting badly hurt by the Shutdown with the understanding that in 21 days, if no deal is done, it’s off to the races!

But Cupp was having none of it on Saturday night, mocking Trump for claiming he didn’t cave.

“Cave, cave, cavey cave, cave,” Cupp began. “That’s right, the dreaded c-word so many Republicans had come to fear. The president caved after 35 days of a partial government shutdown that proved to be all pain and no gain for Trump and, indeed, the country.”

She then told Trump to learn how to govern in the next 20 days:

“So now what?” she asked. “The clock is ticking. We have 20 days. Twenty days until America faces another possible shutdown, or maybe even a national emergency. But also, and maybe even more alarmingly, 20 days to find out if President Trump can learn how to govern. That’s a crash course, for sure, but that’s essentially where we’re at. Can he figure out how not to repeat his mistakes, or is he going to wait for Nancy Pelosi to back up the car and run him over again?”

Trump already made a mistake by threatening another government shutdown in three weeks if Congress doesn’t give him what he wants, thereby undermining Republicans in negotiations on Capitol Hill. Democrats have no incentive to acquiesce to such a bully tactic. The main reason why Democrats refused to negotiate over Trump’s wall in the first place is because a government shutdown should never be used as a negotiation tactic. If they give it to him after this new threat, he’ll just do it over and over again every time he wants something. A line has to be drawn and Trump has to agree not to cross it.

And if Trump does shut the government down again, he’s already set himself up to be blamed again by the American people, who overwhelmingly blamed him the first time and opposed his wall.

“We just learned that without Republicans in total control of Congress to bolster Trump’s unpopular policies and weaken his checks on authority, he’s little more than an empty suit,” she concluded. “The moment Democrats took control of the House, he was proven utterly ineffective, powerless to bend Democrats and Senate Republicans or lagging poll numbers to his whim. His powers of persuasion and his tweets, his idle threats, none of it was enough, of course, to move Democrats. By shutting down the government, Trump got the lesson he never had to learn in the first two years in office.”

And that lesson is that checks and balances are real and Congress will provide much needed oversight and act as a check on executive power now that Democrats are in charge of the House. Playtime is over for Trump.