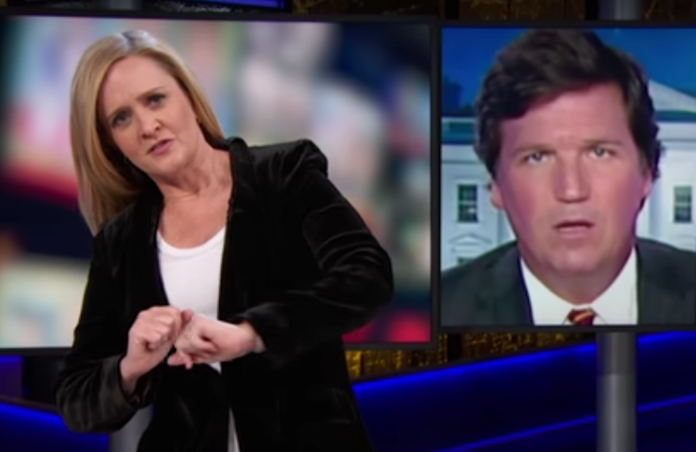 Carlson has been under fire all week after old audio clips from multiple radio show appearances resurfaced. Fox News has not even punished Carlson, nor has Carlson apologized. But Bee took aim at him and hit the target on the bulls-eye.

“There are a few things any sensible human knows not to do,” Bee began. “Never lick a bus station door handle. Never start a conversation with a man about Infinite Jest. And never go on a radio show hosted by a guy named Bubba the Love Sponge. Apparently, Tucker Carlson is not a sensible human being.”

She then played Carlson’s multiple statements advocating for everything from child rape, to demeaning women, to genocide and racism.

“That is vile and disgusting and presumably the audition tape that got him a job interview at Fox,” Bee quipped.

Carlson initially responded to to the outrage by playing down his remarks as “naughty” and that if people want to know who he is they should watch his show.

“You naughty little bad boy, advocating genocide,” Bee said. “Well, guess what fucko, we have been watching your show and we found it’s a revolting trash heap of racist talking points. Now, don’t get me wrong, I’m not saying Tucker Carlson is a white supremacist. Oh no, I’m sorry, yes I am.”

Cue the clips of Carlson spewing racism on television, including the same phrases chanted by neo-Nazis in Charlottesville, Virginia during a 2017 march in which a counter-protester was murdered by a car.

“Where have I heard sweaty white men yelling about being replaced?” the comedienne asked before showing yet another clip.

“So, he’s against white supremacy but uses the catchphrase of the Charlottesville mob?” she continued.

Apparently, Carlson’s racism was easy to find according to Bee.

“None of this was hard to find,” she said. “The only in-depth research we did was to determine that his name can be rearranged to spell ‘Ol’ Cracker Nuts.’”

Indeed, KKK grand wizard David Duke is a fan and The Daily Stormer, which is now defunct, endorsed the show as akin to their website having a television show.

“You know who hasn’t lived a life like that?” Bee asked. “Anybody who’s met you.”

“Tucker has spent nearly 20 years getting paid to be an angry white man on three cable news networks, only two of which have fired him, so far,” she concluded. “Playing to white victimhood is his whole schtick, yet he claims he doesn’t know what he’s doing.”