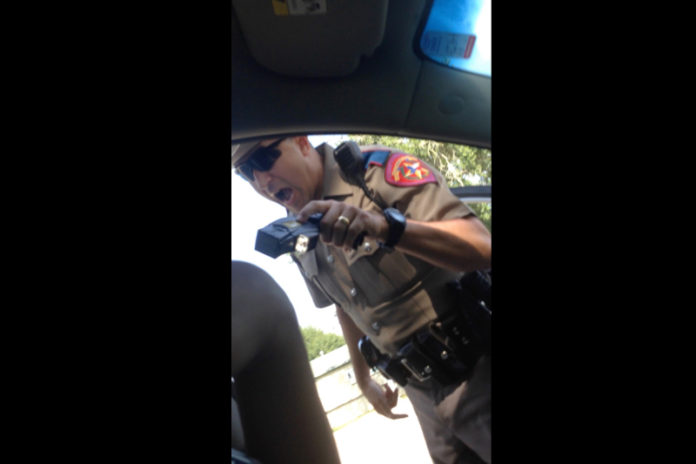 On July 13, 2015, Chicago woman Sandra Bland was found dead in Waller County jail in Hempstead, Texas. Her death was ultimately ruled a suicide, but that didn’t ease concerns about the initial stop. Trooper Brian T. Encinia, Bland’s arresting officer, told her to get out of the car and threatened her with a stun gun before forcefully arresting her.

Encinia was also fired after a grand jury determined he had lied about his reason for stopping her. With that (and other) critical hits to police-community trust, some even contested the cause of death entirely.

However, a new report by the New York Times doesn’t just question Trooper Encinia’s story, one of being deathly afraid of Ms. Bland. The report shatters it for one simple reason — Sandra Bland filmed the confrontation herself:

It’s difficult for Mr. Encinia to defensibly claim he thought the cellphone was something else when he acknowledged its essence and function on video when he told Bland to put it away.

Unfortunately, not all wrongful deaths or stops capture national attention, but Bland’s did. The family has already settled a lawsuit against the Waller County jail for $1.9 million, and according to the report, things changed ever so slightly with regards to police protocol.

“[the] Sandra Bland Act in 2017, which requires training in de-escalation techniques for all police officers, sets up protections in custody for people with mental health and substance abuse issues and requires that independent law enforcement agencies investigate jail deaths.”

Eventually, prosecutors dropped the perjury charges against Trooper Encinia because they did not expect a conviction. In exchange, he offered a promise never to work in law enforcement ever again. According to his lawyer, Chip Lewis, he is “living a quiet life.”

A small memorial for Bland can be found at the spot where she was arrested in Hempstead.