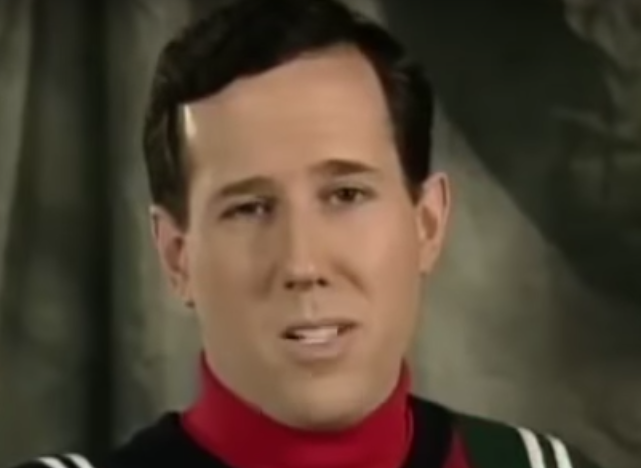 Santorum opposes impeaching President Donald Trump even though he strongly supported impeaching former President Bill Clinton in 1998 when he served in Congress.

The difference is that while Clinton only lied about a blow job, Trump got caught obstructing justice at least ten times.

Burnett brought up Santorum’s hypocrisy by playing video of his own words for him.

“So Senator, back to you, you have a little bit of an inconsistency here to answer for,” Burnett began. “In 1998, you voted to impeach President Bill Clinton, and here is what you said at the time.”

“Removing a president during some of the more prosperous American times, and life is good here in America right now, and as someone who is seen as at least partly responsible for this, obviously is not going to be a particularly popular thing,” Santorum said at the time. “But what we do here is going to set a standard for future presidents’ behavior, and future impeachment standards, and I think, as well as conviction standards.”

That’s clearly inconsistent with what many Republicans, including Senator Lindsey Graham (R-S.C.), are saying now about impeachment because the president is a Republican.

“How is that consistent with you saying now that there is no reason?” Burnett asked.

“I didn’t say there is no reason,” Santorum insisted. “There was a special counsel, and the special counsel found that the president perjured himself, something that was not found in the Mueller report. I think Nancy Pelosi has learned from that, that maybe even though he may deserve it, and I don’t believe the president does in this case, it’s not maybe the right thing to do.”

Again, Trump repeatedly obstructed a federal investigation on at least ten occasions and even lied to Mueller in his written answers to questions.

Clinton lied about an extramarital affair, something Trump has also done while in office, only his lie is worse because he committed campaign finance felonies to cover it up.

“You had this whole investigation, and there was nothing impeachable found except for that he lied about having sexual relations with Monica Lewinsky,” Burnett noted. “So it was a totally separate thing. Yes, it was a lie, it was perjury. But I’m just making the point. In this case, you have more than 500 former members of the DOJ, prosecutors, saying that it’s clear the president obstructed justice and committed multiple felonies.”

“The person responsible for that did not find that,” Santorum claimed.

“Well, we don’t know what he found, because he declined to tell us what he found!” Burnett fired back. “He did not find. He said, you guys decide.”

Indeed, Special Counsel Robert Mueller left the obstruction determination to Congress, not Attorney General Bill Barr, which is why Congress is demanding the full unredacted report and the underlying evidence presented to the grand jury so they can make their determination.

But Santorum continued to desperately defend Trump against impeachment.

“The reality is, those 500 people, how many dealt with an obstruction case with the president?” Santorum asked. “I would suspect not 500 of them or anything close to that. This is a very unusual case. And to go out and I think was highly irregular and not helpful for them to go out and make this claim when most of them don’t even know what they’re talking about. This is a very difficult case.”

No, it’s not difficult at all. These 500+ former DOJ officials have successfully prosecuted obstruction cases on less evidence, so they know what they are talking about. If Trump were not president he would have been prosecuted and convicted already. The evidence in Mueller’s report is that strong, but Barr is shielding Trump from answering for his crimes.