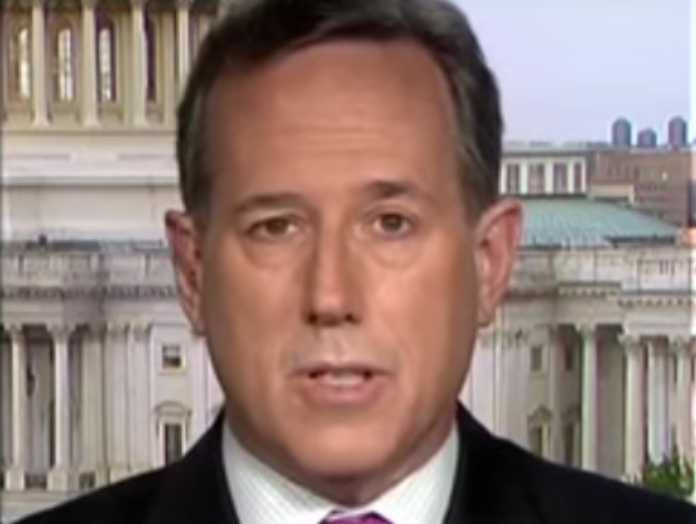 CNN political analyst Rick Santorum, who constantly defends President Donald Trump, could not defend Trump’s campaign for seeking dirt on Hillary Clinton from the Russians in 2016 on Monday morning.

On Sunday, Trump’s lawyer Rudy Giuliani insisted that “there’s nothing wrong with taking information from Russians” in response to the Mueller report noting that the Russians that members of the Trump campaign met with inside Trump Tower in June 2016 touted their connections to the Kremlin.

Donald Trump Jr., Paul Manafort and Jared Kushner all attended the meeting, which Trump later wrote a letter about claiming that it was all about adoption in an effort to cover up the true intent.

“I think what Rudy’s point was, talking to someone who happens to be a Russian is not problematic,” he said. “The question is whether that person is a Russian who is connected to the Russian government. So obviously there’s people…”

But CNN host John Avlon, who has spent plenty to time in recent weeks calling Trump out for his lies, interrupted to call out Santorum because the Mueller report makes it clear that the Russians the Trump campaign met with have strong connections to the Russian government.

All of a sudden, Santorum had to admit the Trump campaign did something wrong.

“Again, if it’s someone connected to the Russian government, no, you shouldn’t be taking information, shouldn’t be soliciting and having conversations with them,” Santorum said. “I agree with that, but that’s not necessarily what was known at the time.”

However, it was known at the time according to Don Jr’s own emails.

“But it is what was promised!” Avlon reminded him. “Don Jr. believed it was a Kremlin-linked person who was bringing dirt on Hillary Clinton.”

“I think that’s inappropriate,” Santorum conceded. “There’s no question about it.”

Another Trump defender crashed and burned trying to spin the Mueller report.