The United States Blues
Home News Will Sarah Huckabee Sanders Be The Next White House Staffer To Get... 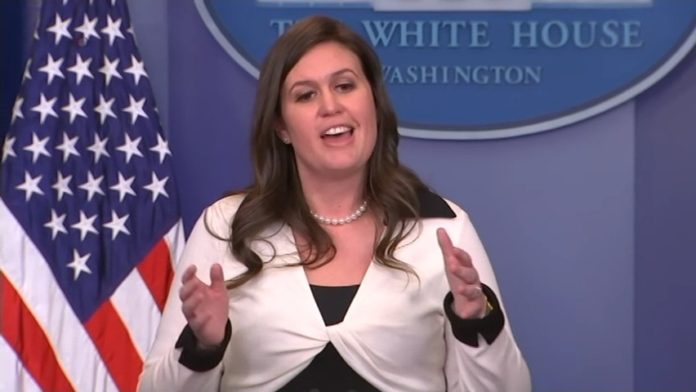 At the Wednesday press briefing, Sanders noted that attorneys for Trump had won arbitration that granted a temporary restraining order against Daniels to prevent her from publicly discussing their past affair. That, CNN’s Jim Acotsa reported, put the entire story on “steroids.”

The lawsuit filed by Daniels alleges that Trump didn’t sign the non-disclosure agreement she was bound by after Trump paid her $130,000 just weeks before the 2016 election and is therefore invalid.

Michael Avenatti, an attorney who represents Daniels, says that his client, who received the $130,000 from Michael Cohen, Trump’s personal attorney, would not be deterred by threats from the president or members of his legal team:

“Earlier today, Mr. Cohen through his attorney, Mr. [Lawrence] Rosen, further threatened my client in an effort to prevent her from telling the truth about what really happened. We do not take kindly to these threats, nor we will be intimidated.”

Interestingly, the lawsuit filed this week by Daniels also suggests that she has proof of her affair with Trump in the form of images or videos. Vanity Fair reports:

“Language in the lawsuit refers to a clause focused on ‘certain still images and/or text messages which were authored by or related to’ Trump, who is referred to as DD throughout the filings, short for David Dennison. (Clifford is Peggy Peterson, or PP). PP, according to the agreement, had allegedly threatened Trump with ‘selling, transferring, licensing, publicly disseminating and/or exploiting the Images and/or Property and/or other Confidential Information,’ and was therefore required to hand over any of DD’s’ ‘tangible property’ and ‘permanently delete any electronic copies that cannot be transferred.’ Each time Clifford breached this term, the agreement said, she would be liable for $1 million, a measure presumably designed to ensure that she’d be disinclined to circulate any documentation of the alleged affair.”

In the meantime, Sarah Sanders may have sealed her own fate with just a few poorly chosen words.