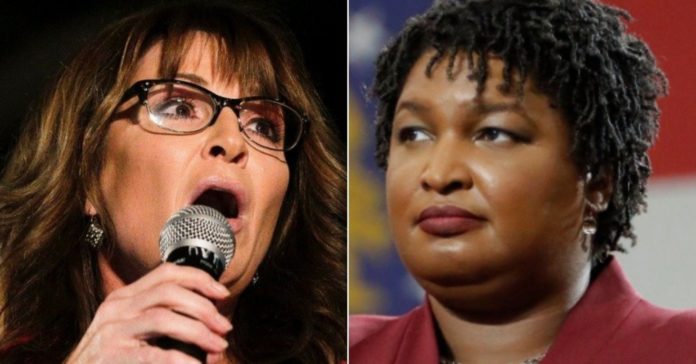 Unfortunately for Palin, however, her comments were met with reminders that she remains one of the least popular people in the country.

The reference to “literal loser” in the headline Palin shared is clearly meant to be a slam on Abrams, who did indeed lose the 2018 Georgia governor’s race by the slimmest of margins. It should also be noted that Abrams was defeated by the former chief elections official in the state, Secretary of State Brian Kemp, and there were numerous claims of voter suppression.

In response to Palin’s tweet, others on social media reminded the half-term governor that she hadn’t exactly done very well in the 2008 race, either:

I must have missed when you were sworn in as Vice President, literal loser.

My favorite scene in Game Change was at the end when they told you how you weren’t going to get to give your own concession speech and you tried to give one anyway and John McCain told you to bugger off.

You lost the VP race. You quit your job as governor so you could do a TV show. That got canceled. Now you’re just an idiot tweeting and trying to stay relevant. I’d say you live in a glass house but you’re too stupid to know what that means. Loser indeed.

Again: can you see Russia from that GLASS HOUSE??

Are you kidding me? Stacey Abrams has bachelor’s, master’s, & law degrees. She was a deputy city atty in Atlanta, & served in the Georgia House for over 10 years, becoming the first woman to hold a leadership position in that chamber. You didn’t even finish a term as governor.