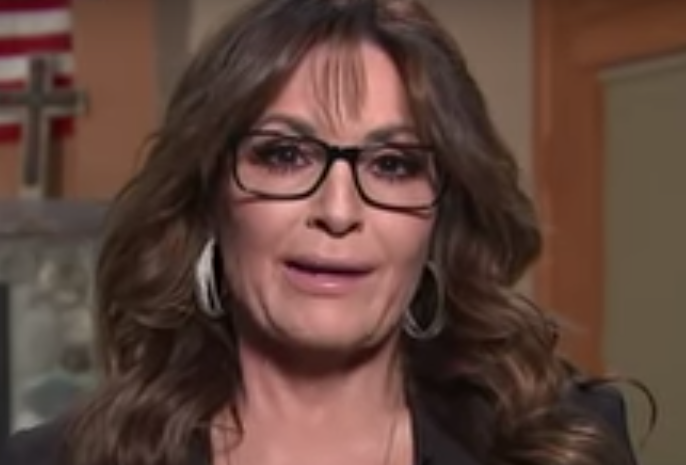 Former half-term Alaska Governor Sarah Palin returned to television screens on Monday to embarrass herself, this time whining about not being invited to the late-Senator John McCain’s funeral.

McCain passed away last year after a courageous battle against brain cancer. His funeral arrangements were made by himself and his family. In addition to President Donald Trump not being invited, the McCains also opted to not invite Palin, whom McCain picked as his running mate in the 2008 presidential election.

His choice of Palin would end up being the worst political decision of his life and it opened the floodgates to an extreme conservative movement that rejects facts and idolizes stupidity. Palin is largely blamed for the campaign’s loss to former President Barack Obama because she couldn’t answer simple questions, spouted conspiracies and falsehoods at every turn, and eventually went rogue.

The rise of Palin undoubtedly paved the way for a candidate like Trump to run and win the election in 2016, and we know how disastrous his presidency has been.

So, it’s understandable that McCain would not want to be remembered as the man who gave Palin and her ilk a platform. Instead, he invited Obama to deliver a eulogy.

On Monday, Palin spoke to Good Morning Britain about the funeral and whined about not being invited.

“I was kind of surprised to be publicly disinvited to the funeral,” Palin said. “They didn’t have to embarrass me and others, it wasn’t just me it was other people from our campaign back in 2008. It’s kind of a gut punch.”

She then went on to blame others for the loss instead of taking any responsibility.

“It made sense to me and my supporters why John McCain did tap me,” Palin said. “But, yeah, once getting out there on that national stage and realizing that there are so many snakes in politics, they are so many snakes in the Republican party who were running the show and allowing me to get clobbered. They were looking for someone to blame for their really crappy type of campaign that they ran. I was a scapegoat.”

This would have been a good time for Palin to simply say “no comment” and move along. Instead, she took shots at McCain’s family and played the victim rather than let go of something that happened eight months ago. Sounds an awful lot like the current occupant of the Oval Office.